Zookeepers are giving animals custom-made frozen treats made with fruit, meat, fish, and vitamins and finding various ways to keep the animals cool. 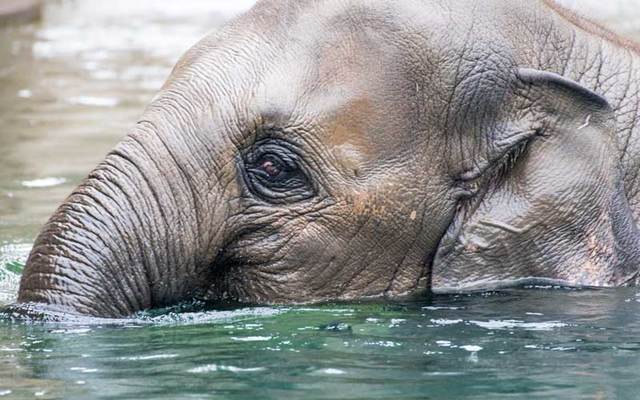 An elephant cools off in the water. iStock

Dublin Zoo animals are being treated to ice pops and mud baths to help cope with Ireland’s summer heatwave.

Gerry Creighton, Operations Manager at Dublin Zoo, said that extra attention to the animals is necessary with the soaring temperatures.

Read More: The most hilarious Irish reactions as unusual heatwave pounds the country

"In some cases we make up fruit pops, which is made with fruit and Vitamin C drinks," he explained.

"We give the tigers frozen meat in their pool, and for the elephants we brought in ten tons of mud clay which works like a face pack.

"The elephants put it on their backs to protect their skin.

"We also have fire hydrants to cool down the habitats and wet the animals down in the mornings before they go out.

"They love it, it's a novelty factor for the animals - it doesn't cause them any stress."

If animals don’t want to spend time outside in the sun, they have the option of keeping cool in their air-conditioned houses designed to create shade.

Said Creighton: "The big cats will submerge in the water, we give fish ice-blocks to the sea lions, and they try to break it down.

"It's all activity based and everyone has an option. The snow leopards have rocks in their habitats that provide cooler areas.

"The keepers check on the animals to make sure they're okay and have plenty of water and plenty of shade."

The animals all have different ways of keeping cool.

Did you know that giraffes have dark and light patches on their skin to keep their temperature constant? In cooler weather the dark patches attract the sun and hold in the heat. In hot weather, the large blood vessels around each dark patch release heat, keeping the animal cool pic.twitter.com/gmAwP7MTTb

Sam, a 42-year-old rhino at the zoo, cooled down in a giant mud wallow.

His keeper, Kenneth Mackey, told the Irish Independent that the mud wallow is created from topsoil with lots of minerals.

"Sam will wallow in it and coat themselves in the mud which acts as a sun repellent," he said.

"Rhinos also exfoliate, so they coat themselves in the mud and scratch against walls, rocks or logs.”

Zookeeper and veterinary nurse Aisleen Green enticed Max, an Amur tiger, to take a dip in the pool by throwing in chunks of meat for the tiger to chase after.

"As it is such a warm day we decided to give Max a little dip in the pool," she said.

"We feed them every Monday, Wednesday and Friday so we broke his food into chunks and put them into the pool so he can swim about and cool off.

Read More: A wedding on the wild side? You can now get married at Dublin Zoo

"When the meat goes to the bottom of the water he will scoop the meat up without putting his head into the water.

"During the winter he gets a very thick coat but he has lost all of that. There's so many trees and shade in his habitat, so he's getting a breeze coming from the park which keeps him nice and cool.

"He would be used to high temperatures in his natural habitat and on hot days tigers like to spend a lot of time asleep and in the shade chilling out."