"Plastic Justice," a special report from Relatives for Justice on how British state forces used plastic bullets to kill 17 innocent Irish people with impunity, will get a trans-Atlantic launch on Saturday, October 24. 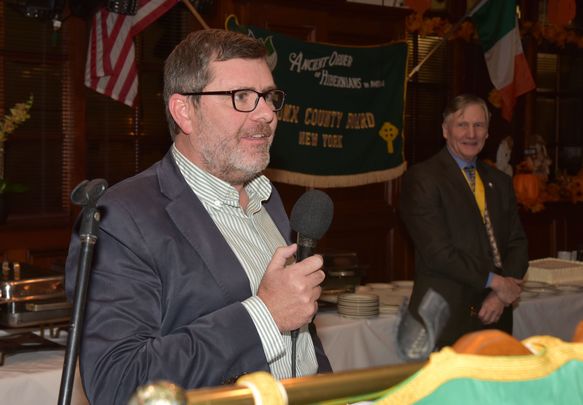 Mark Thompson at an even in Rory Dolan's in the Bronx, New York. AOH

The launch will begin at 4 p.m. in Ireland, 11 a.m. in New York. You can watch via this YouTube live link here.

Martin Galvin, the AOH’s national Freedom for All Ireland chairman says, “Plastic Justice is a key chapter in the story of British repression. This groundbreaking report will highlight political and legal strategies used by the British to deny truth and real justice to victims' families, such as treating victims as criminals or rioters to justify murders and intimidate witnesses. Crucial documents and files are systematically withheld.

“Inquests or legacy investigations which could shed light on these murders are arbitrarily denied. Not one British trooper or Royal Ulster Constabulary member was ever found guilty for any of these 17 killings, even where victims were children. Both Frances Meehan and Mark Kelly will speak about their personal experiences, fighting for justice.

Galvin added, “The report and speakers are also expected to highlight how deadly plastic bullets were used to intimidate public demonstrations of political support on issues like the Blanket Protest and Hunger Strikes of 1980 and 1981 or Internment Day protests.

"The AOH and LAOH feel privileged to be invited to be a part of this launch. There is a growing demand to hear speakers from Ireland on these issues. Health restrictions may block us from bringing speakers to America, but new technologies mean this transatlantic launch will be joined by Hibernians across the United States.

" As someone who was present for one of the killings covered in this report, that of John Downes on August 12, 1984, and have personally witnessed, the continuing cover-up or plastic justice meted out to the Downes family, I know this launch will be a moving and important event."