Meanwhile Jason Corbett trial heard evidence from forensic experts about the DNA traces found on the baseball bat used to kill him. 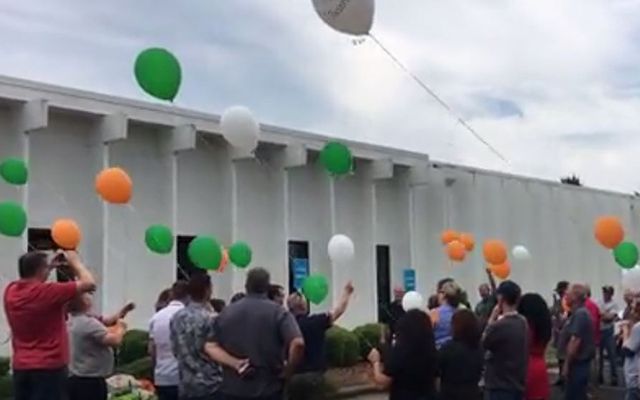 Jason Corbett's former co-workers hold a memorial commemoration for the second anniversary of his death with balloons the color of the Irish flag. Twitter

The colleagues of Jason Corbett, the Limerick man killed two years ago in North Carolina, have released balloons in the same colors of the Irish flag to mark the second anniversary of his death.

"We miss you Jason," was one of the touching notes tacked to one of the balloons before they floated away.

Staff at his former company, Multi Packing Solutions, performed a similar balloon release on the first anniversary last year, comforting each other over memories of the “hard day” they had endured in 2015.

While those who worked with him paid tribute to his life, the trial in a Lexington Court continued.

His widow, Molly Martens Corbett, and her father, Thomas Martens, deny charges of murder and say Martens, a former FBI agent, battered his son-in-law to death with a baseball bat out of self-defense.

In the trial’s second week jurors heard that the baseball bat used to kill Corbett did not have any fingerprints on it and tests were unable to prove conclusively whether either of the two defendants had left any traces of DNA on the bat.

However forensic scientists did conclude that Corbett’s hair and blood was present on both father and daughter’s clothing from that night.

12 hairs on a brick prosecutors believe was also used to beat Corbett with also matched the pair - the results for a further 13 hairs on it were inconclusive.

Defense attorney James Holton said a hair found in Corbett’s hand had not been tested and had it been it would have been found to have been one of Molly’s - thus corroborating her story that he had strangled her and her father had rushed to her defence.

The trial is expected to conclude some time next week.

A wrongful death suit against the pair has also been lodged by the executor of Corbett’s will.