Amal Clooney was appointed Special Envoy on Media Freedom as part of a British Government campaign to highlight assaults and restrictions on journalists across the globe. 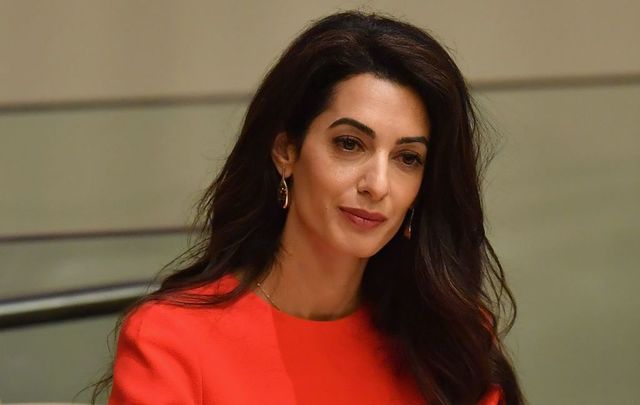 Amal Clooney participates in the Press Behind Bars: Undermining Justice and Democracy event during the 73rd session of the United Nations General Assembly at the United Nations in New York on September 28, 2018. ANGELA WEISS/AFP/Getty Images

Amal Clooney was appointed Special Envoy on Media Freedom as part of a British Government campaign to highlight assaults and restrictions on journalists across the globe. She has been asked to start with one case created by British forces.

International human rights lawyer Amal Clooney has been called upon to meet two arrested journalists in Northern Ireland as a matter of urgency after being appointed as a special envoy on media freedom by the British Government on Friday.

Amnesty International has called on Clooney to arrange an early meeting with Trevor Birney and Barry McCaffrey to discuss how they could face serious criminal charges for investigating collusion during The Troubles.

Clooney is one of the most acclaimed human rights lawyers in the world. Her high-profile clients include WikiLeaks founder Julian Assange and former Ukrainian Prime Minister Yulia Tymoshenko. Hollywood actor George Clooney, who has Irish roots, is also her husband.

The lawyer has been asked to meet the two Irish journalists, who worked on an acclaimed documentary called “No Stone Unturned” with Oscar-winning film-maker Alex Gibney. Their arrests last August sent shock waves across Britain and Ireland.

Read more: George Clooney: Irish were treated terribly in America and not accepted

They remain on bail until September of this year, 13 months after up to 100 police officers raided their homes and offices, seizing computers and documents, which the two men are campaigning to have returned.

Gibney's film examined the massacre of six innocent soccer fans as they watched a World Cup game in a small Co Down pub in June 1994. It became known as the Loughinisland massacre and the families of the innocent men have never received justice, which is why Gibney took a strong interest after being alerted to their case.

The slaughter in a rural pub cast a huge shadow over the celebrations which followed the Republic of Ireland’s shock 1-0 victory over strong favorites Italy at the Giant’s Stadium in New Jersey.

Thousands of Irish people attended the game, which was described as a “home game” by IrishCentral founder Niall O’Dowd because the Irish fans outnumbered their rivals after traveling from all over the United States to cheer on the boys in green.

Patrick Corrigan of Amnesty International said it would be ironic if the British Government, under Clooney’s direction, took a strong interest in human rights cases across the globe while ignoring concerns about press freedom much closer to home.

“We welcome the UK Government’s initiative to promote press freedom around the world. However, the UK must also address concerns here at home if it is to have credibility as an international champion for media freedom,” he said.

Birney and McCaffrey were arrested in August 2018 in connection with an alleged breach of the UK’s Official Secrets Act through the use of confidential documents about the police investigation into the massacre.

A 2016 report from the Police Ombudsman for Northern Ireland found that there had been collusion between the Royal Ulster Constabulary and the Ulster Volunteer Force killers in relation to the killings.

The report backed up the claims of the victims’ families that the subsequent police investigation had been undermined by a desire to protect those responsible for the massacre.

Their arrests have raised concerns that journalists investigating cases of collusion in Northern Ireland would be hampered from carrying out their work.

In recent weeks a Netflix documentary about the Miami Showband massacre, a report about criminal charges in relation to the Bloody Sunday massacre in Derry, and an inquest into the Ballymurphy massacre in Belfast have all shone a spotlight on allegations of British collusion with loyalist terrorists during The Troubles.

“The arrest of these widely-respected journalists has had a chilling effect on media across Northern Ireland, and we are in no doubt that press freedom is now at grave risk,” warned Corrigan on Friday.

His concerns have been echoed by Michelle Stanistreet, the General Secretary of the National Union of Journalists (NUJ) in London.

“This case is the biggest specific threat to press freedom in the UK at the moment,” she said Friday afternoon. “The arrest of two NUJ members and the on-going legal threats are an appalling abuse of power and should be a major concern to all journalists and everyone who cares about investigative journalism, human rights and civil liberties.”

On Friday, Clooney was appointed to act as British Foreign Secretary Jeremy Hunt’s special envoy on media freedom as part of a British Government campaign to highlight assaults and restrictions on journalists across the globe.

The UK and Canada have launched a global campaign to #DefendMediaFreedom and shine a spotlight on media abuses.

Today @Jeremy_Hunt, @cafreeland and Special Envoy on Media Freedom Amal Clooney discussed how we can reverse the trend of violence against journalists. pic.twitter.com/daK3a6hYr7

Last year was the deadliest on record for journalists, with claims that 99 were killed, 348 detained, and 80 taken hostage by non-state groups across the globe.

“It has never been more dangerous to report the news. Targeting journalists undermines democracy and impedes our ability to hold the powerful to account and it allows countless human rights abuses to take place in the dark. Those with a pen in their hand should not feel a noose round their neck,” she said on Friday.

Following her appointment, she singled out India and Brazil as two large democratic countries where press freedom has been put at risk – as well as highlighting the brutal murder of Washington Post columnist Jamal Khashoggi in Istanbul.

However, the irony was not lost in Northern Ireland on Friday that the British Government is asking an acclaimed lawyer to focus on press freedom across the globe while neglecting a very serious case involving two reporters much closer to home.

An attempt to silence Birney and McCaffrey with a gagging order last month, which would have prevented them from commenting on the case, was seen as a sinister move when there has been so much attention on the issues of collusion, Brexit, and the return of a hard border in recent weeks.

Watch: Journalist @trevorbirney was arrested last August with his colleague @Barry_TheDetail over a docu exposing police collusion in NI - “the police, who could have gone after the killers, instead targeted us, the journalists” #AmnesyMediaAwards19 @PA pic.twitter.com/pKi1qw2ldJ

Many people in Co Down are shocked that the police in Northern Ireland allowed killers to get away with murder, but then put their resources into targeting journalists who tried to find out the truth about the atrocity.

All six men were sitting with their backs to the door, watching the football game, when two gunmen from the Ulster Volunteer Force (UVF) burst in and sprayed the premises with bullets.

The release of “No Stone Unturned” gave hope to the bereaved families that the people responsible would finally be brought to justice. Instead, they have seen the journalists who investigated the case for Gibney being raided, arrested, and threatened with criminal charges.

* Ciaran Tierney won the Irish Current Affairs and Politics Blog of the Year award in Dublin recently. Find him on Facebook or Twitter here. Visit his website here - CiaranTierney.com. A former newspaper journalist, he is seeking new opportunities in a digital world.