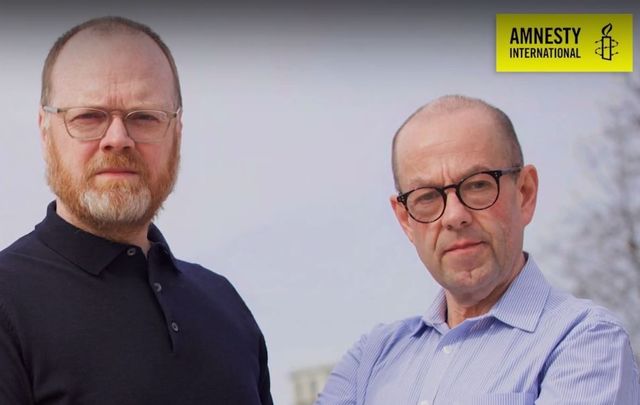 Amnesty International has called for messages of support for Trevor Birney and Barry McCaffrey, Northern Ireland journalists who have been arrested and questioned after filming a documentary about the 1994 Loughinisland massacre.

In their 2017 documentary ‘No Stone Unturned,’ Birney and McCaffrey for the first time named the primary suspects in the 1994 massacre and alleged collusion between the Ulster Volunteer Forces (UVF) and the police.

In 2018, the two journalists were arrested for allegedly breaching The Official Secrets Act; their film relied on unredacted documents received from an anonymous source.

Patrick Corrigan, Amnesty International’s Northern Ireland Programme Director, said in a press release: “Amnesty is deeply concerned that the arrests of Trevor and Barry, and the seizure of documents and computer equipment, puts press freedom at risk in Northern Ireland."

“The arrest of two of the most widely-respected journalists in Northern Ireland has sent a shiver of fear through the region."

“When the police are arresting journalists who have investigated police collusion in the killing of civilians, rather than the killers and those who helped them get away with murder, people everywhere should be worried.”

On June 18, 1994, people had gathered at O’Toole’s Pub in Loughinisland, Co Down to watch The Republic of Ireland play in the World Cup.

Members of the Ulster Volunteer Force (UVF) entered the pub and began shooting with assault rifles at innocent patrons, killing six civilians and injuring five. The pub was allegedly targeted because it was frequented by Catholics.

"To this day, no one has been brought to justice," says Amnesty International.

In 2017, Birney and McCaffrey released their documentary ‘No Stone Unturned,’ which alleged that there was evidence of collusion between Northern Ireland police and the UVF.

The documentary also, for the first time, named the chief suspects in the horrific crime: Ronald Hawthorn, Alan Taylor, and Gorman McMullen.

During filming, Birney and McCaffrey received from an anonymous source unredacted versions of documents that helped them prove collusion between the police and the UVF.

"We were sent, anonymously, an unredacted report which set out exactly what had gone on," says McCaffrey.

“They seized documents, phones, and computers. They arrested the men, apparently in connection with breaching the Official Secrets Act, in relation to documents which had been leaked to them.”

“Six months on, Trevor and Barry continue to face questioning by police in Belfast and potentially could face prison – a huge worry for journalists in Northern Ireland.”

“We are concerned that the arrest of these journalists, in connection with their work investigating grave human rights abuses within the UK, undermines freedom of expression and freedom of the press.”

“Criminal laws are being increasingly misused around the world to restrict the vital work of journalists. It is extremely worrying that we are now potentially seeing this happen here at home.”