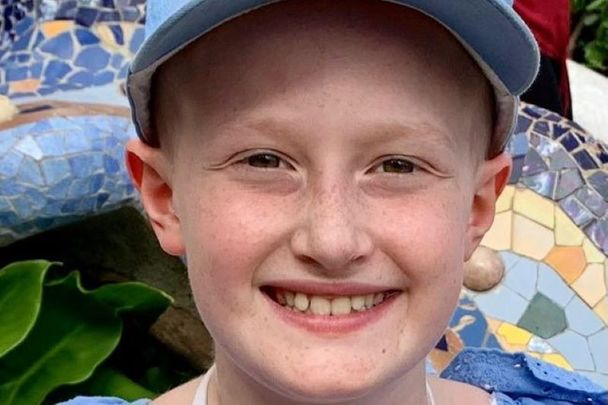 Alice Hayes (9) needs life-saving cancer treatment in the US.

An Irish mother’s desperate bid to secure life-saving cancer treatment in the U.S. for her young daughter has been given a massive boost thanks to the child's golden-hearted older sister and hundreds of her school pals.

The youngster's parents, Norah and Dylan, have faced a daunting race against time to raise $550,000 before Christmas to guarantee her life-saving medical treatment at the world-renowned Memorial Sloan Kettering Cancer Center in New York.

Her mother said both her and her 47-year-old husband's lives have been turned upside down since Alice's diagnosis back in April this year.

But they are optimistic their courageous daughter can beat the odds and make a full recovery if she is enrolled on the New York clinical trial, a non-Health Service Executive funded treatment plan which requires full payment before Christmas to secure enrolment in the next available group.

And now, following a huge community fundraising effort in Co. Wicklow by 500 secondary school students, including the child's older sister, Laragh, the daunting fundraising target is finally in sight.

More than $62,000 was raised as the 13-year-old sister led hundreds of school pals from Loreto Abbey Dalkey on a 19km sponsored walk from Wicklow town to Greystones on Saturday.

The youngster's mother, originally from Greystones, said that she was "blown away" by the collective effort, which has helped her raise over $450,000 in just six weeks.

And with less than $100,000 needed to reach the target, the mother of two said she now "feels certain" she will achieve her goal of securing a place for her younger child on the three-year treatment program in a matter of weeks.

Speaking from Barcelona, where her daughter is currently receiving specialist treatment following six months of grueling chemotherapy at Our Lady's Children's Hospital in Dublin, Hayes, 47, said, "I can't put into words how grateful we are to everybody.  There are fundraising efforts going on everywhere.  People have just taken Alice to their hearts, and it's given us a huge lift.

"Things have been extremely tough since Alice was diagnosed, but she has been brilliant throughout all this.  She's the most wonderful child, and we will do everything we can to get her on this trial, as any parent would.

"It's been very hard for my older daughter, Laragh.  She's the kindest person you could ever meet, and all she wants is to see her sister get better.  Thanks to her efforts and all the other girls at Loreto and everyone else who was involved, we are now very close to being able to secure a place for Alice on the clinical trial."

Hayes also said she hopes to reunite her two daughters at their Blackrock, Co. Dublin home later next month for a much longed-for family Christmas.

She added, "The doctors here in Barcelona are liaising very closely with the ones in New York, and she will be evaluated before she's put on the clinical trial.  But the first step is to have the funds in place, and thanks to all the overwhelming support we're receiving I know we're going to get Alice there."

To donate, go to www.gofundme.com/f/help-alice-beat-cancer-fund.