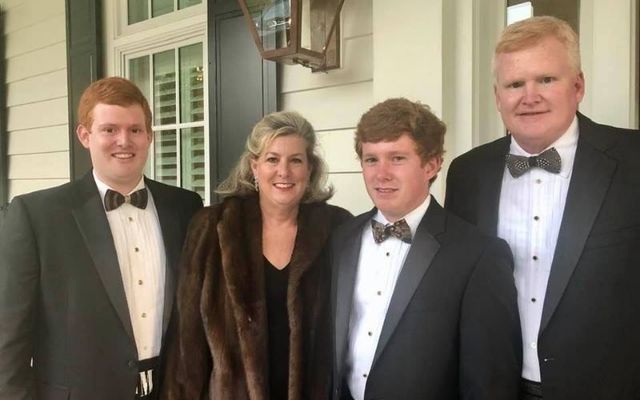 Police have not released a suspect or motive, however, they are investigating the unsolved murder of the South Carolina lawyer's wife and son, which took place just two months before his own self-made botched assassination attempt and insurance fraud.

Police are investigating the unsolved murder of Paul (22) and Maggie (52) Murdaugh, following the botched self-made assassination attempt carried out by husband and father, Alex (53), addicted to opioids. The South Carolina heir was trying to leave a life insurance fortune for their remaining son, Buster.

Now People.com has reported that Maggie had met with a divorce lawyer six weeks before she and her son were shot and killed in June 2021.

Paul and Maggie were shot and killed outside the family's hunting lodge in Colleton County, South Carolina. Previously the mysterious shooting, in June 2021, was believed to be connected to a court case in which Paul was involved. Now it has been revealed that six weeks before the shooting Maggie had met with a diverse lawyer.

Alex Murdaugh, a previously prominent Irihs American South Carolina lawyer, has admitted that in September he had attempted to stage his own murder with the aim of getting his other son, Buster, a $10 million life insurance payout. He was shot by a hired assassin but survived. He later admitted to having been addicted to opioids for the past 20 years. He was also found to have misused funds at his law firm and his law license has been suspended.

Following September's revelations police are re-examining the murder of his wife and son, Maggie and Alex, as well at the mishandling of a settlement claim following the death of the Murdaugh's housekeeper, Gloria Satterfield, in 2018 at the family's house.

After the death of Maggie and Paul in June it was Alex who called 911 having discovered the bodies. Now People have revealed that Maggie had begun to examine the family finances in order to establish the couple's marital assets. She had traveled to Charleston, SC, to meet with a lawyer.

Alex Murdaugh's wife Maggie 'met with divorce attorney just weeks before she and her son Paul were assassinated' https://t.co/AQKdE5b1OS pic.twitter.com/ukmfxCzeF7

Alex's coworkers at the firm Peters, Murdaugh, Parker, Eltzroth, and Detrick (PMPED) said they'd noticed a change in the couple's relationship and noted Maggie no longer came to the office to have lunch with her husband.

People state that their source is a law enforcement source close to the murder investigation.

The police have not identified a motive or a suspect for Maggie and Paul's murders.

A spokesperson for Alex, Amanda Loveday, released the following statement in the wake of People.com's article:

"The most recent allegations by People Magazine regarding the state of Maggie and Alex Murdaugh’s marriage are totally inconsistent with what we have been told by friends and family members. Also, we have reviewed many years of text messages on Alex’s phone, and the conversations between Alex and Maggie portray a very loving relationship. It is our hope that the media will continue to focus on covering the investigation of the person or people responsible for the murder of Maggie and Paul and not reporting salacious stories with no credible sources connected to the Murdaugh family."

Alex's former law firm, PMPED, said he had "lied and stole from us". The firm accused him of misappropriating millions in order to feed an addiction to painkillers.

These are the deaths and investigations connected to the Murdaugh family https://t.co/z3GqIylZWE #NEWS pic.twitter.com/eZstehBoGZ

The firm released a statement on its website distancing itself from Alex, who had resigned on September 3, a day before the allegedly botched hit.

"We were shocked and dismayed to learn that Alex violated our principles and code of ethics. He lied and he stole from us.

"No member of PMPED was aware of Alex's scheme," the statement read.

"When we learned he betrayed our trust, we requested his resignation immediately. We have yet to speak to anyone who was aware of his addiction to opioids."

After the botched assassination attempt,  Alex was arrested and charged for allegedly hiring a hitman to kill him. He has been released from jail and is currently in an out-of-state drug rehab facility.

He was also charged with insurance fraud, conspiracy, and filing a false police report. These felonies could bring up to 20 years in prison if convicted of all three charges. There is no minimum sentence. The killings of his wife and son, Maggie and Paul, remain unsolved.