Ireland's Aidan Walsh, 24, is guaranteed to win an Olympic medal in boxing with his split-decision victory over Merven Clair in the Kokugikan Arena. 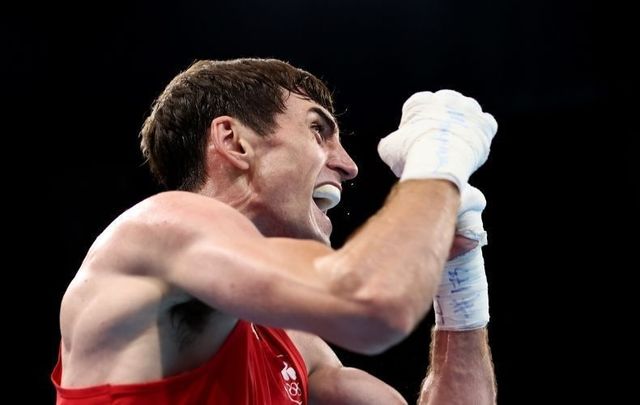 Irish welterweight boxer Aidan Walsh is guaranteed at least a bronze medal at the Tokyo 2020 Olympic Games after his quarter-final victory over Merven Clair of Mauritius on Friday morning.

Walsh, 24, has become the third Team Ireland athlete to secure a medal at this summer's Olympics with his split-decision victory over Clair in the Kokugikan Arena.

He wins out via split decision against Merven Clair (MRI) in a cracking quarter final ??????

The Belfast boxer showed composure throughout Friday morning's bout, repeatedly catching his opponent on the counter and with devastating right hands.

The 24-year-old raced clear of Clair in the opening round, with all five judges scoring the first round 10-9 in his favor. The second round was a much closer affair, with Clair landing more scoring shots, but three of the five judges saw it in Walsh's favor, handing him an unassailable 2-0 lead heading into the final round.

Clair needed to score a knockout in the final round to claim an unlikely victory, but Walsh kept his composure to outbox the Mauritian and win the round on four of the five judge's scorecards.

Walsh is now guaranteed at least a bronze medal but can guarantee silver and a place in the welterweight final with a win over McCormack on Sunday morning.

"It’s incredible, it’s amazing, it’s something that I dreamed of since I was no age," Walsh said after the fight.

The 24-year-old has become the ninth Belfast boxer to win an Olympic medal and follows in the footsteps of the likes of Paddy Barnes and Michael Conlan, who won medals at Beijing 2008 and London 2012.

However, Walsh picked up a "slight strain" while celebrating his victory in the ring on Friday morning, although Team Ireland said that "they’re looking forward to the fight on Sunday".

Earlier on Friday, women's lightweight boxer Kellie Harrington moved one step closer to securing at least a bronze medal with a unanimous victory over Italian Rebecca Nicoli in her opening bout of the 2020 Tokyo Games.

Harrington produced a masterclass to justify her top-seeding and outbox her tricky opponent, who rarely made an offensive move and preferred to try and pick the Dubliner off on the counter.

Harrington now progresses to a quarter-final bout with Algeria’s Imane Khelif on Tuesday where victory will guarantee her at least a bronze medal.