Judge, a chaplain with the New York City Fire Department, died on 9/11 while administering last rites in the lobby of the North Tower 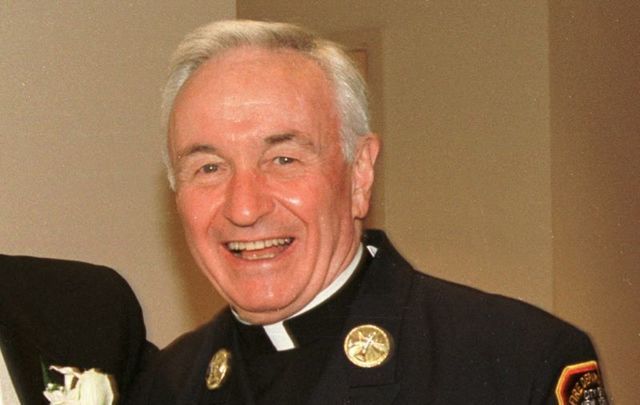 Admirers of Father Mychal Judge, the first recorded victim of the terrorist attacks on the World Trade Center, are calling for the priest to be considered for sainthood.

Judge, a chaplain with the New York City Fire Department, died on 9/11 while administering last rites in the lobby of the North Tower. Images of his body being carried by members of the FDNY were later broadcast around the world and became synonymous with 9/11.

Judge was born in Brooklyn to two Irish immigrants from County Leitrim and joined the Franciscan Order in 1954, where he devoted himself to helping vulnerable groups, including the homeless, people suffering from HIV/AIDS, and the LGBT community.

Judge, who was ordained a priest in 1961, was posthumously revealed to be a gay man.

Some admirers of the Franciscan Friar now argue that he should be considered for sainthood due to his efforts on 9/11 and his earlier efforts to make the US Catholic Church more welcoming for the LGBT community.

Rev. James Martin, a Jesuit priest based in Rome, believes that Judge should be considered for sainthood because of his efforts to welcome the LGBT community into the Catholic Church.

"Mychal Judge shows us that you can be gay and holy," said Martin, who advocates for greater LGBT inclusion in the Catholic Church.

"Father Judge´s selflessness is a reminder of the sanctity that the church often overlooks in LGBTQ people," Martin told the Daily Mail. "Heaven is filled with LGBTQ people. All the church has to do is start to recognize this."

Many people advocating for Judge to be considered for sainthood were encouraged by Pope Francis in 2017 when he proclaimed a new pathway to sainthood for those who sacrificed their lives to save others.

In the wake of that announcement, Rev. Luis Escalante, who investigates possible sainthood cases for the Vatican, has received dozens of testimonies supporting Judge's case.

Escalante told the Associated Press that many of these testimonies describe Judge as the "best icon" of humanity.

However, the Franciscan Order has failed to organize a sainthood campaign on behalf of their deceased brother.

Rev. Kevin Mullen, leader of the Franciscans' New York-based Holy Name Province, told AP that the order would not campaign for Judge to be considered for sainthood for "generations to come".

"We are very proud of our brother´s legacy and we have shared his story with many people," Mullen told AP.

"We leave it to our brothers in the generations to come to inquire about sainthood."

Escalante said that he hopes the Franciscan Order's failure to campaign for Judge to be considered for sainthood does not deter others from taking up the cause in the future.

"The negative decision of the Friars cannot be seen as a preclusion to going ahead with Fr. Judge´s cause," he said.

"It's just a challenge to the American people."