Irish and American dignitaries were on hand in Washington, DC to unveil the plaque that commemorates the 1916 Easter Rising in Ireland. 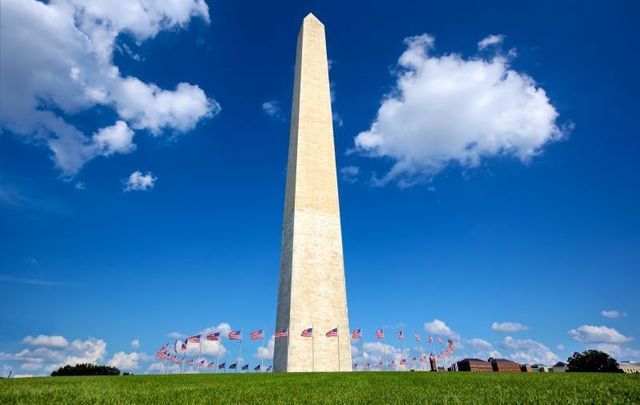 A plaque commemorating Ireland's 1916 Easter Rising has been unveiled at the Washington Monument. Getty Images

Thomas F Meagher, the creator of the Irish flag, is recognized in plaque

Ireland's 1916 Easter Rising has been officially commemorated in Washington, DC as a bronze plaque was unveiled at the Washington Monument this week.

Read More: Easter Rising rebels approve draft Proclamation of the Irish Republic on this day in 1916

RTÉ reports that while the plaque was originally presented by President Michael D. Higgins to the US National Parks Service in 2017, the monument has been closed to the public for renovations since August 2016 and is set to reopen on September 19.

The bronze plaque includes a replica of the 1916 Rising Proclamation and references Thomas F. Meagher, the creator of the Irish Flag, as the embodiment of the links between the two Republics. Meagher fought in the Irish Rising of 1848 and in the ‘Fighting Irish’ 69th regiment of the Union Army in the American Civil war.

Speaking during Wednesday's ceremony, Irish Senator Mark Daly said: “The permission for this plaque was given in 2016 to celebrate the centenary of the 1916 Rising, but as the Washington Monument has been closed for the last number of years for structural works, this is the first time the plaque will be seen by the public.

Speaking at the dedication of the replice of the 1916 Proclamation and the plaque from the President of Ireland at the Washington Monument in DC with the US Secretary of the Interior, Minster Boxer Moran & the US ambassador to Ireland pic.twitter.com/c59YChC27y

“I am delighted to have been invited to the Washington Monument to see the plaque unveiling. This is a great honor for Ireland and shows the strong and enduring friendship between Ireland and the United States.

“Our relationship with the US is one of our most important, its commitment to peace and prosperity on this island is invaluable. It’s extremely rare to secure permission for a new plaque – the last time this happened was when Alaska became a State in 1949, and it took until 1982 for that plaque to be installed.

“Ireland is one of only 17 nations to have a plaque in the monument, most of which were installed in the 1800s when the monument was under construction.

“The Washington Monument contains commemorative and memorial stones received from all 50 States. The majority of stones were received between 1849 and 1855, and these memorial stones are only accepted in very rare circumstances, such as the admission of a new state to the union or replacement of a previously donated stone.

“The announcement of the permission for the installation of a plaque from Ireland was made by the United States National Park Service on St. Patrick’s Day 2016."

Among the guests at the event were Donal O’Sullivan of Navillus Construction, New York, who worked on the 9/11 Memorial and supported the installation of the Washington Monument plaque from Ireland, and Col. Jim Tierney, a member of the 69th regiment (a.k.a. the Fighting Irish) of which Thomas F. Meagher was also a member.

Separately on Facebook, Senator Daly said he spearheaded the plaque after he learned "there was no plaque from Ireland in the monument because Britain would not allow its colonies to give money toward the building of the monument to honor the General who defeated them in the American War of Independence."

Also present was Ireland’s Minister of State for the Office fo Public Works Kevin Moran who said: "This plaque will now be visible to the public for the first time and honors the connection to George Washington and the fight for Independence. This rare honor celebrates the shared heritage of our two nations and reminds us of our precious friendship and ties.”

A great honour to attend with Senator Mark Daly and Irish Ambassador to the US Dan Mulhall, today’s unveiling of a plaque commemorating the 1916 Rising at the Washington Monument. pic.twitter.com/GsN6BHDMQD

Acting Chief of Staff at the White House Mick Mulvaney will visit the Monument with Senator Daly and Minister Moran on Thursday morning.

Ireland’s Ambassador to the US Dan Mulhall was also in attendance during Wednesday's ceremony:

It was a privilege to be present today for the dedication of a 1916 commemorative plaque at the #Washington monument, which also memorializes Thomas Francis Meagher & the Irish contribution to America. Our memorial joins 193 others, mainly from US States, inside the monument. pic.twitter.com/F8rjFTM3PX