The Muintir Eolais Chalice, which has been described as the "wandering symbol of Irish faith", was given to the Jamestown Franciscan Friary in south County Leitrim in 1644. 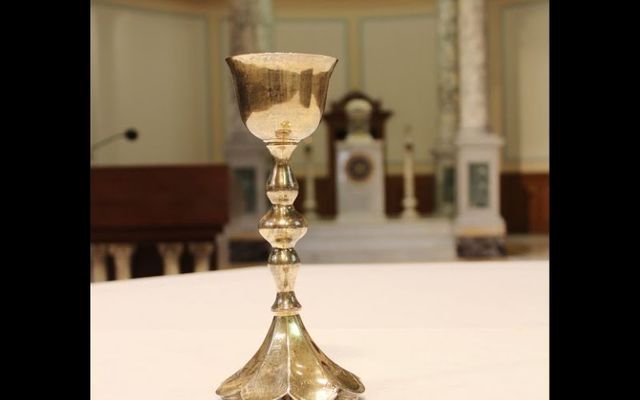 A 400-year-old chalice that was hidden when Cromwellian forces attacked Ireland during the 17th century has been returned to Leitrim five years after it was discovered in Cincinnati.

The Muintir Eolais Chalice, which has been described as the "wandering symbol of Irish faith", was given to the Jamestown Franciscan Friary in south County Leitrim in 1644.

Jamestown fell to Cromwellian forces less than 10 years later on March 19, 1653, and the religious order was ordered to leave the county.

However, the priests took to the woods and mountains to perform mass in secret during Oliver Cromwell's invasion, taking the chalice with them.

According to the Irish Times, Local historian Msgr Liam Kelly conducted research and discovered in 2017 that the chalice was being housed in the Mount Saint Joseph convent of the Sisters of Charity in Cincinnati, Ohio.

He contacted the convent, who had no idea where the chalice came from. Veronica Buchanan, archivist for the Sisters of Charity, was delighted to discover that the chalice originated in Muintir Eolais, an area consisting of seven parishes in County Leitrim, including the Jamestown Franciscan Friary.

It is not known how the chalice ended up in the US, but it is believed that the Franciscans brought it to Santa Fe or Albuquerque in the years after the Irish Famine. The Sisters of Charity had a convent in New Mexico where Franciscan priests used to celebrate mass, which may explain how it ended up in the possession of the religious order.

Buchanan contacted Msgr Kelly last May to inform him that the convent was downsizing and that they were looking for a new home for the chalice.

It was soon agreed that the chalice would be taken home to Leitrim and Msgr Kelly traveled to Cincinnati in October to bring it back home.

He presented the chalice to the parish priest of Kiltoghert Fr. Francis Garvey in St. Mary's Church, Carrick-on-Shannon, during 12 p.m. mass on December 12.

The chalice will be now be presented on loan to St. George's Heritage Centre in Carrick-on-Shannon, where it will be safely kept on public display.