The extremely rare 15th century chalice had been stored in a cardboard box in the owners’ stables. 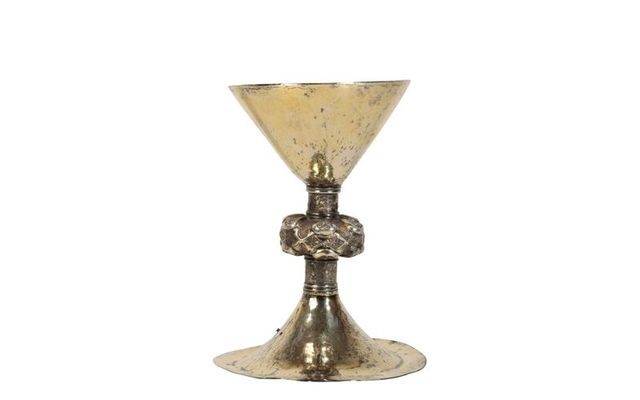 The remarkable silver gilt chalice, which dates back to circa 1480, was sold at auction by Dukes of Dorchester in the UK on July 2.

The chalice had been stored in a cardboard box in the stables of a Devon manor house for years by the owners, who had no idea of its value, reports the Independent.

Senan MacDonagh of Dukes said: “When the owners first showed me the chalice, I immediately realized it was something special which needed further research."

World-renowned silver expert Phillipa Glanville OBE, who was consulted by the auctioneers,  recognized the significance of the item and suggested the historical item was probably Irish based on its form and decoration.

Dr Edith Andrees of the National Museum of Ireland, Dublin said the chalice may been made in or around Cork, and noted that the circular spreading foot is unusual.

McDonagh said that “the vicissitudes of the Reformation and the ensuing Dissolution of the monasteries by Henry VIII may suggest that this chalice was hidden, or even buried, thus ensuring it’s survival. Very little pre-Reformation silver survives."

It is believed the chalice was purchased by wealthy financier Wilson Rae-Scott, the grandfather of the present owner, in the 1930s. Rae-Scott, who was from Chiswick, London, was a collector of silver and works of art in the years before the Second World War.

The chalice was initially expected to sell for €12,000, but after a heated battle between three Irish bidders, the piece finally sold for nearly €58,000.

The owners were “flabbergasted“ and “utterly delighted” with the sale.

“Needless to say we are extremely pleased we took it to Dukes when clearing our house prior to moving."