The quart-size bottle of Cassidy & Monastervin whiskey is the prize lot of a pub collection auction of more than 10,000 items. 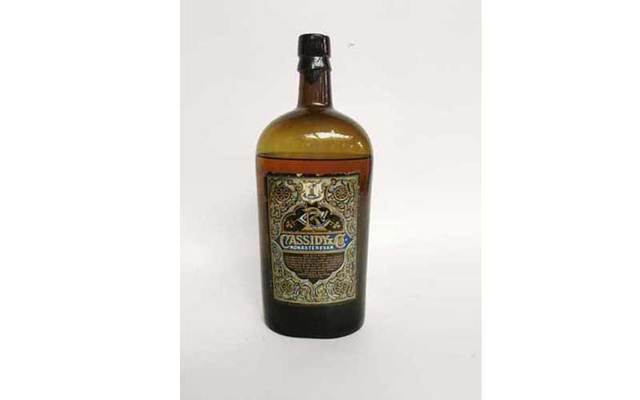 A rare bottle of Cassidy & Monastervin whiskey from the 1880s is up for auction. Victor Mee Auctions

The quart-size bottle of Cassidy & Monastervin whiskey is the prize lot of a pub collection auction of more than 10,000 advertising and memorabilia items being sold in October, reports The Irish Examiner.

The whiskey was made by the Cassidy family, who made whiskey at their Co Kildare mill from 1784 until 1921.

The whiskey is part of the McCabe Collection, which belonged to the late Molly McCabe, owner of Molly’s Pub in Warrenpoint, Co Down.

The sale will include advertising bar statues, antique bottles, mirrors, glasses, trays, advertising signs and more, collected over 100 years by several generations of the McCabe family.

Said auctioneer Victor Mee: “We are extremely excited to have the opportunity to sell this magnificent collection that is like no other we have ever come across and are sure it will be of high interest amongst bidders globally.”

Read More: Rare, signed copy of The Good Friday Agreement to be auctioned

The auction will be held virtually due to the pandemic. The first part of the sale will take place on October 5-6. Remaining items are expected to be auctioned in coming months.

For more information, go to VictorMeeAuctions.ie.

Celebrating the US presidents with Irish roots and connections