Bottle of rare George Roe Irish Whiskey up for auction

In the 19th century, George Roe’s Thomas Street Distillery was one of Dublin’s largest and most productive distilleries in Ireland. 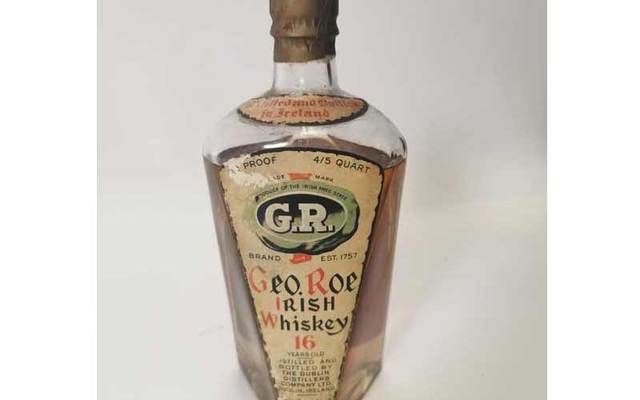 A rare bottle of George Roe Irish Whiskey is expected to fetch more than $14,000 at auction this week.

The 750ml bottle of George Roe Irish Whiskey will go to the highest bidder at Victor Mee’s online auction on August 12.

It was once the most popular whiskey brand in the world, but today there are few unopened bottles left.

According to the Victor Mee Auctions listing, “this 16 year old release of Geo. Roe seems to have been produced for export to the US sometime in the 1930's. Most remarkably of all, the label proclaims this to be ‘pot still malt whiskey’, making this an incredibly rare Irish single malt distilled some time before 1923 at a distillery that has been closed for nearly a century.”

In the 19th century, during the golden era of Irish whiskey, George Roe’s Thomas Street Distillery was one of Dublin’s largest and most productive distilleries in Ireland, and possibly the world.

The Roe whiskey brand began in 1757 when Peter Roe purchases a small distillery on Thomas Street in the heart of Dublin’s distilling and brewing district. The venture was a success and the premises were expanded so that the distillery soon fronted both Thomas Street and South Earl Street.

The distillery was inherited by Peter’s son Richard, who ran the business from 1766 to 1794.  Meanwhile, another member of the family, Nicholas Roe, established a distillery in Pimlico in 1784.

In 1832, George Roe inherited both distilleries, combining them into one large distillery. Roe’s two sons, Henry and George, took over the family business in 1862 and the firm continued to prosper. At its peak, the distillery produced over 2 million gallons of Irish whiskey yearly and was Ireland’s largest exporter of whiskey.

However, after the turn of the century, prohibition in America, the 1916 Uprising, and the UK’s trade embargo caused the company severe financial difficulties.

The Thomas Street and Marrowbone Lane distilleries shuttered in 1923, and the Jones Road Distillery closed in 1926. It took some 20 years to dispose of all the stocks of whiskey, according to Whisky Magazine.

At the time of its closure, the Roe brand was itself over 170 years old.

The Roe & Co distillery at Thomas Street was located just 100 meters across the street from the world-famous Guinness Brewery. When the distillery closed, Guinness purchased the site. Although most of the distillery buildings were demolished, a few of the buildings were incorporated into the Guinness St. James Gate Brewery, reports The Whiskey Trail.

Diageo, the producers of Guinness, launched Roe & Co Irish Whiskey, in 2017. Last year,  the Roe & Co Distillery and Powerhouse Bar opened in a building close to the site of the original Thomas Street Distillery.