Yale University's "Lessons from Peace: Northern Ireland and Colombia" conference on April 26 is open to the public and will be hosted both in-person and online. 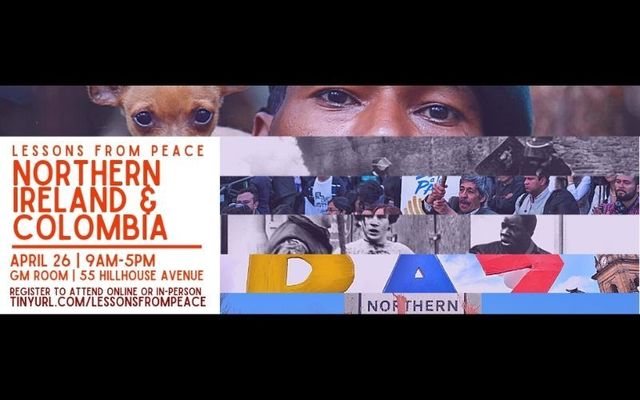 The "Lessons from Peace: Northern Ireland and Colombia" will be hosted on Tuesday, April 26. Yale University

The "Lessons from Peace: Northern Ireland and Colombia" conference will be hosted both in-person and online from Yale University in New Haven, Connecticut this Tuesday, April 26.

It has now been 23 years since the Good Friday (Belfast) Agreement, perhaps the most lauded peace deal in modern political history, was signed.

Meanwhile, five years ago, the seminal agreement to end violence in Colombia – the longest-running civil war in the Western hemisphere –was reached.

Both conflicts seemed, to seasoned observers, utterly intractable. Both peace processes are marked by remarkable successes as well as enduring challenges.

The Yale University conference "Lessons from Peace: Northern Ireland and Colombia" this Tuesday, April 26 will feature key figures from both conflicts examining what can be learned about how peace has been won and implemented in these two cases. Are there lessons to be learned from other conflicts which also looked unsolvable?

The conference will be hosted at Yale University's Horchow Hall, GM Room at
55 Hillhouse Avenue in New Haven, CT 06511. You can register for the event, which will be hosted both in-person and online, online here.

Program for "Lessons from Peace: Northern Ireland and Colombia"

9:00 am: Welcome and introduction of participants by Bonnie Weir Phd, Founding co-Director of the Program on Peace and Development at Yale University.

9:05-9:30 am: Keynote Address: Lessons from Peace in Colombia and Northern Ireland

Participants at the "Lessons from Peace: Northern Ireland and Colombia" Conference

Eduardo Cifuentes is President of the Colombian Special Jurisdiction for Peace. He previously served as Director of the Human Rights Division of UNESCO (2003-2005) and has, since 2013, served as a member of the national group of the Permanent Court of Arbitration in The Hague.

Martin Flaherty is the Leitner Family Professor of Law and Founding Co-Director of the Leitner Center for International Law and Justice at Fordham Law School. He is also a Visiting Professor at the Princeton School of Public and International Affairs and at Colombia University School of Law. He has led or participated in human rights missions to Northern Ireland, Turkey, Hong Kong, Mexico, Malaysia, Kenya, Romania, and China.

Pablo de Greiff served as UN Special Rapporteur on the promotion of truth, justice, reparation, and guarantees of non-recurrence. He is also Senior Fellow and Director of the Transitional School of Law, New York University.

Sergio Jaramillo Caro served as High Commissioner for Peace (2012-2016) and National Security Advisor (2010-2012) to the President of Colombia, Juan Manuel Santos. In that capacity, he first led the secret negotiations with the FARC guerrillas, which ended with the signing of the and then together with Humberto de la Calle led the public negotiations that ended with the signing of the Final Agreement in November of 2016. As Peace Commissioner, he also had to oversee the disarmament of the FARC in 2017.

Avila Kilmurray is a Visiting Professor with the Transitional Justice Institute (Ulster University), the Migration and Peacebuilding Executive at The Social Change Initiative, and a Board member of the International Fund for Ireland (IFI) and other peacebuilding entities.

Rory Montgomery is a former Irish diplomat who served as Permanent Representative to the EU, Ambassador to France, and Second Secretary General at the Departments of the Taoiseach and Foreign Affairs with particular responsibility for Brexit. He has been principal EU adviser to Enda Kenny and Simon Coveney and has worked extensively with Irish, Northern Irish, British and European politicians, and officials. He was part of the Irish team which negotiated the Good Friday Agreement.

Fergal Mythen is a serving Irish diplomat, currently based at the Department of Foreign Affairs in Dublin with lead responsibility for the Northern Ireland Peace Process, British-Irish relations, and Irish relations with the United States and Canada, as well as with Latin America and the Caribbean region. He is also Irish Ambassador to the UN (designate.)

Niall O’Dowd is the founder of IrishCentral, Irish America Magazine, and the Irish Voice newspaper. Niall was deeply involved in the peace process in Northern Ireland, specifically playing a key role in advising the Clinton administration during that time. He has written for the New York Times, the Guardian, Huffington Post, and the Irish Times.

Jonathan Powell was Chief of Staff to Tony Blair from 1997 to 2007 and the chief British government negotiator on Northern Ireland during that time in office. Jonathan was a British diplomat from 1979 to 1996 working on the negotiations to return Hong Kong to China in the early 1980s, the CSCE human rights talks, CDE arms control talks with the Soviet Union in the mid-1980s, and the ‘Two plus Four’’ talks on German reunification in the late 1980s. Since leaving government Jonathan has written, "Great Hatred Little Room: Negotiating Peace in Northern Ireland" and "The New Machiavelli: How to wield power in the modern world." Powell is also an Honorary Professor at the Mitchell Institute at Queen's University Belfast.

Carlos Ruiz Massieu is Special Representative of the Secretary-General for Colombia and Head of the United Nations Verification Mission in Colombia. Ruiz Massieu has been deeply involved in the establishment and support of United Nations peace operations, as well as in reforms to the Organization in the areas of Peace and Security, and Development and Management.

Ian Shapiro is a Sterling Professor of Political Science at Yale University. He has written widely and influentially on democracy, justice, and the methods of social inquiry. A native of South Africa, he received his J.D. from the Yale Law School and his Ph.D. from the Yale Political Science Department where he has taught since 1984 and served as chair from 1999 to 2004. Shapiro also served as Henry R. Luce Director of the MacMillan Center for International and Area Studies from 2004 -2019.