Georg and Bettina Peterseil met in 1979 and bought a remote bog in the peatlands of County Mayo five years later in a bid to find a place of spiritual healing. 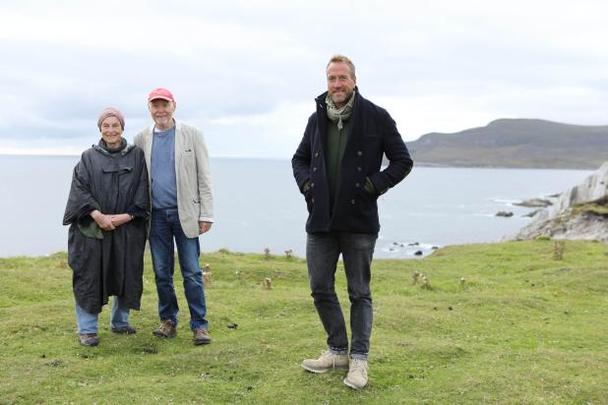 Georg and Bettina Peterseil with Ben Fogle in a promo show for "New Lives in The Wild".

A German-Austrian couple who have lived on an eco-friendly Irish bog for the last 38 years have converted what was once a barren landscape into a thriving and colorful wildlife habitat that provides healing and happiness.

Georg and Bettina Peterseil met in 1979 and bought a remote bog in the peatlands of County Mayo five years later in a bid to find a place of spiritual healing.

Georg, a Viennese architect, was recovering from a divorce and the trauma of an abusive childhood at the time, while his wife Bettina, a German-born teacher, was born in Hamburg at the end of the Second World War and had grown up ashamed to be German.

The couple told the Sunday Times that they were looking for a fresh start when they bought the bog in 1984, adding that they "felt very separated from the earth and from other people".

"We were on a healing journey. We wanted to find a place in the wilderness and heal that disconnection," Georg told the Sunday Times.

The bog was a desolate place when Georg and Bettina bought it using Bettina's inheritance money almost 40 years ago.

There were no trees and no roads at the site, while there was no fundamental infrastructure such as electricity or running water.

The couple spent their first two years living in a caravan before they started building their new home, while they spent three years without electricity, four years without running water, and five without a telephone.

They had to be "creative" to get through those first five years, Georg told the Sunday Times.

The couple survived on gas stoves and candlelight, while they harvested rainwater and made use of a local well to obtain fresh water. They also bathed naked in a local lake and homeschooled their two children.

Today, the couple live in a four-bedroom house that blends in with the local landscape.

The house has electricity and a working telephone, while three wood stoves provide heating. An electric storage heater is kept in reserve for particularly cold days.

They have also planted more than 3,000 trees on the 25-acre site and grow most of their own food, including potatoes, kale, and Brussel sprouts.

They even have a compost toilet, which they clear with a shovel every two months.

Bettina revealed that it takes roughly 20 minutes to clear the compost toilet, while the waste fills up to four wheelbarrows. The couple use the waste to fertilize their garden, which Bettina says symbolizes their efforts to work with nature and transform it into "something useful".

Here's a video showing their little piece of heaven:

The couple's story appears in the 16th season of British adventurer Ben Fogle's series "New Lives in the Wild", which shines the spotlight on people who have swapped city life for remote country living.

Fogle said that the couple were able to obtain the bog because "no one else wanted it" and said that the site showcased the power of humans to transform an inhospitable land into a thriving habitat.

"It is a place of great healing and happiness. Georg and Bettina are a very spiritual couple. They believe in serendipity and destiny. I stayed for a week and came away feeling uplifted," Fogle told the Sunday Times, adding that Georg and Bettina's story is the best that he has covered in 16 seasons of "New Lives in the Wild".

Bettina, who walks barefoot through the bog, says that the peat gives her "shelter".

"When I lie on the heather I feel happy," she said.

Georg and Bettina, now in their 70s, are looking to sell their eco-friendly home, admitting to Ben Fogle that they are getting too tired to manage the property by themselves.

They are not looking for just any buyer, however.

They said that they want to find a "custodian" who will continue to protect and develop the site.

"We are at a stage in our life when it would be good to step back. Our question is, how could this natural paradise now best serve other people? Who do we pass the baton to so they can continue our journey? It could be a charity, it could be a trust, it could be a person," Bettina told the Sunday Times.

The couple have no idea where they will relocate to once they sell their current home and said that they may even stay on at the site if they find someone to work the land.

"We don’t have a plan. Since the two of us met, our life has worked best when we moved into the unknown," Georg said.