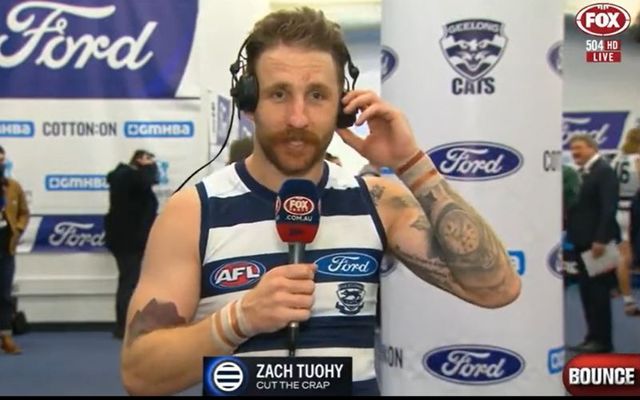 Irish man Zach Tuohy, who is now a professional player with the Australian Football League's Geelong Football Club, was the focus of a "cringe-worthy" live TV moment.

Zach Tuohy's Irish accent was the subject of a "cringe-worthy" bit from Australian commentator Andrew Gaze during the "Cut the Crap" segment on the Fox Sports show "Bounce" last weekend.

Tuohy, a native of Co Laois who is a professional player with the Australian Football League's Geelong Football Club, was speaking in a post-match interview about a particularly brutal headbutt he sustained during a match against the Western Bulldogs.

However, for some reason, Gaze made Tuohy's interview the butt of his "Cut the Crap" segment on "Bounce," dubbing it over with a stereotype-laden Irish accent.

"Cut the crap, Zach," Gaze said on the live show. "You know that's not what you really wanted to say. [It] was more like this:

"Oh to be sure, to be sure. Top of the evening to ya, what about the craic?

"That bogan, mullet-wearing leprechaun nabbed me with an old-fashioned Liverpool kiss.

"The last time I caught the Glasgow handshake like that is when I nicked a bloke's Guinness at Paddy O'Reilly's and he put me on my arse like a sack of spuds.

"And fair play to the young fella, aye. I'll have to take him out and get on the lash and we'll have a whale of a time."

Gaze was shown falling over with laughter as the bit aired.

Bottom of the barrel stuff. This is so cringeworthy pic.twitter.com/XAEbG7dbbm

Although the clip drew laughs and applause from guests on the show, Irish Twitter users, not surprisingly, did not see the funny side of it.

Catherine Murphy, an Irish sports journalist based in Melbourne, tweeted: "When Irish journalists are reporting how cringeworthy you are… you know that you’re, well, CRINGEWORTHY.

"Usually I feel sorry for Irish players who have to laugh this stuff off (a source of irritation for them), but I watch this and just feel SO embarrassed for Andrew Gaze," she added.

"This isn’t even offensive as much as it’s not funny and embarrassing for all involved," Irish journalist Aoife Moore said in a tweet.

"Unfunny people trying to be funny," one Twitter user said, while another described it as "mortifying."

One person, however, had a more lighthearted reaction: "Still a better accent than Tom Cruise in Far and Away."