If you’ve got ties to Waterford, the #IAmWaterford social media campaign will make your heart soar. 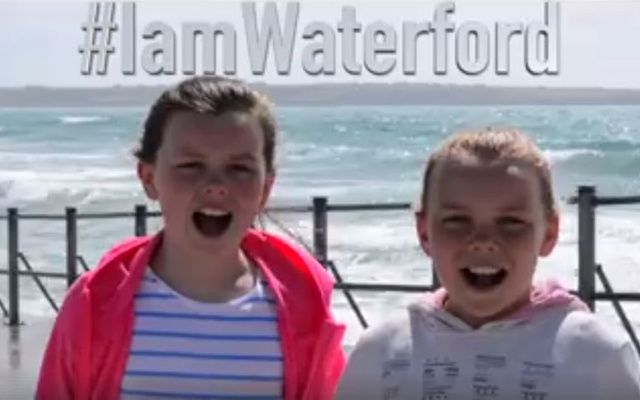 Two young Waterfordians share their pride as part of the I am Waterford campaign. I Am Waterford

A delightfully uplifting new social media campaign is tapping into the pride of people all around the world with roots in Co. Waterford.

#IAmWaterford is the brainchild of artists and creative events facilitator Sean Corcoran - a Waterford man himself, of course. It aims to create a platform for proud Waterford people to showcase themselves in a positive way. The official tagline is “Connecting Proud Waterford People Everywhere.”

Introducing Waterford's new #hashtag and symbol of pride for Waterford and our people. Please use #IAmWaterford pic.twitter.com/kqVUBuPtZn

Thus far, the project has had a huge response, with over 10,000 people becoming members of the Facebook group in less than 2 weeks. There have been over 2,000 posts and 20,000 comments, with over 170K likes and 500K views. The posts have come from people connected with Waterford from all over Ireland, the UK, the States, Australia, Canada, Spain, New Zealand, France, Germany, Italy, the Philippines, and Norway so far. Many from 1st and 2nd generation Waterfordians reconnecting with their Waterford roots.

Corcoran first pitched the idea after he was invited by Waterford City and County Council to attend a Creative Ireland brainstorming session in City Hall along with many other artists and creatives from the region. Creative Ireland is the government-led initiative taking place over the next five years, promoting creativity, community, and well-being throughout the country.

His pitch was met with great approval and, as it turned out, Corcoran was perfectly positioned to lead the I Am Waterford initiative. With his wife Miranda, he runs The Art Hand, a Waterford Business that brings people together to facilitate creative events - everything from family gatherings to full-scale festivals. As a sand artist whose large-scale works often go viral, he’s also well attuned to the ebbs and flows of internet success, what it takes to spread the word and form a strong network.

“The harsh reality is that Waterford has some major challenges to overcome, including its healthcare, unemployment and finding its feet as a tourism destination. I believe we can tackle these things in a stronger and more unified way if we all pull together and use our strengths to our advantage. In my opinion our biggest strength is us, the people. Yes, we live in a beautiful part of the world with so much to offer, but we the people are an untapped resource. If we can harness our positivity and pride then I think that would be a very good place to start from.”

He views the campaign as an opportunity to turn up the volume on how full of pride the people of Waterford and those with links to the county are. “The I Am Waterford campaign is a perfect example of this,” he said. “The respect that Waterford people show towards their loved ones that have passed away is staggering. I believe that we need to use this pride and positivity to our benefit by standing up for ourselves in a more unified way so that we will be ready for the challenges we face now and the ones that lie ahead.”

The messages received so far support all of this. There have been video declarations of pride and connection from around the world, photos of Waterfordians, and, perhaps most touchingly, old family photos of parents, grandparents, and great-grandparents from Waterford back in the day. Some group members have even recognized their own relatives in photos posted by others and have identified them, making the links even stronger.

Corcoran shared that perhaps the most thrilling message so far came from a family in the UK who were looking to contact any relations of Captain Joseph Lumley, the master of the SS Coningbeg, which was torpedoed en route from Liverpool to Waterford along with the SS Formby on December 15, 1917.

“It turns out that the Captain was my Great Granduncle, so we are having a family reunion to coincide with the centenary commemorations that will take place this December!” he said. “Sixty-seven people from Waterford and the surrounding areas died in what was the biggest seafaring tragedy to hit Waterford in the 20th century.”

Corcoran extends an invitation to anyone reading this with relatives who perished on the SS Coningbeg or SS Formby to join them in Waterford on December 15 and 16 for a commemoration of the tragedy 100 years on.

In addition, there are many other school and family reunions being planned through the page, which Corcoran highlights as “one of the many ways that the project is helping to connect our history and heritage with the modern day.”

He added that while many people have used the page to post tributes for deceased loved ones the page is not purely for nostalgia. “We are asking people to post selfies and 3Words in 3Seconds videos (saying I Am Waterford) so whether you’re eating a bla in Brooklyn or flying the flag in France we want your input to the project!”

As the project moves ahead and casts a wider net, Corcoran sees his role as “ensuring that we connect the nostalgia for the past with our passion for the present and to enable young and old to express their pride for Waterford whether that is online or through gatherings and events.

We would like to encourage you all to use the new hashtag #IAmWaterford to showcase our pride for Waterford. pic.twitter.com/gAzAPCLBaX

“It certainly is early days for the project but yes I do see this as something that will evolve over the years.”

Check out the dedicated Waterford page to learn more about the other Creative Ireland linked events and initiatives happening in Waterford.