Tipperary will wear replicas of the original green and white jerseys worn on November 21, 1920, when British forces opened fire during a challenge match between Dublin and Tipperary. 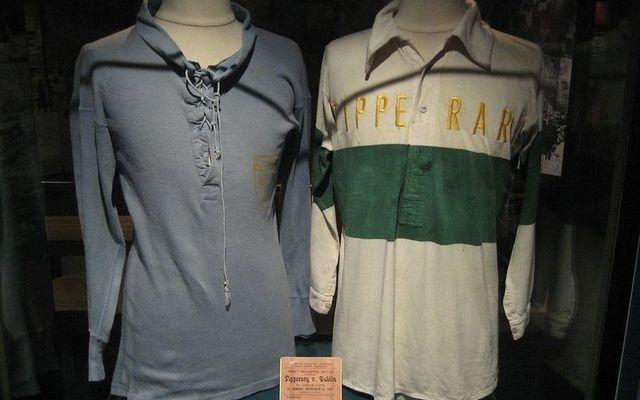 Tipperary's Gaelic footballers will wear special commemorative jerseys marking the centenary of Bloody Sunday in their Munster final clash with Cork on November 22.

The Tipperary County Board confirmed that Tipperary's footballers will wear a special replica of the original green and white jersey worn on November 21, 1920, when British forces opened fire during an exhibition match between Dublin and Tipperary, fatally wounding Tipperary player Michael Hogan and 13 others.

The Tipperary County Board had initially planned to use the jerseys in a special commemorative match between Dublin and Tipperary that would only last 48 minutes and start from the 12th minute; when the shooting started on that fateful day.

However, the COVID-19 pandemic halted the GAA calendar, meaning that games that would normally take place over summer were rescheduled for winter and Tipperary will now instead mark the 100th anniversary of Bloody Sunday in a Munster football final.

Tipperary to wear the Bloody Sunday jersey in this year's Munster final pic.twitter.com/tOoPvFHWks

In a statement, the Tipperary County Board said: "It is only fitting that the Tipperary team will wear the official replica green and white jersey as worn by Tipperary on that eventful day as a mark of respect to all of the fallen."

The statement added: "The Tipperary players and management of 2020 are honoured to wear the official replica green and white jersey in this year’s Munster Final and play their part in marking this historic anniversary event."

Teneo, the county's shirt sponsors, has agreed to forego their name on the front of the commemorative jersey to add authenticity, while the replica jerseys will also feature an image of Michael Hogan along the sleeve.

Teneo Chairman and CEO Declan Kelly said that he was honored that his company was associated with the Tipperary Senior Football team as it marks the centenary of one of the darkest days in Irish history.

Kelly also said that he was proud of the Tipperary team for making their first Munster final since 2016.

The Premier County narrowly beat Clare and Limerick to book a place in the provincial decider later this month, where they will attempt to clinch their first Munster title since 1935.