"Sports Day," a short film from the Irish Film Institute, shows a solid dose of summer fun in South Dublin in the mid-20th century. 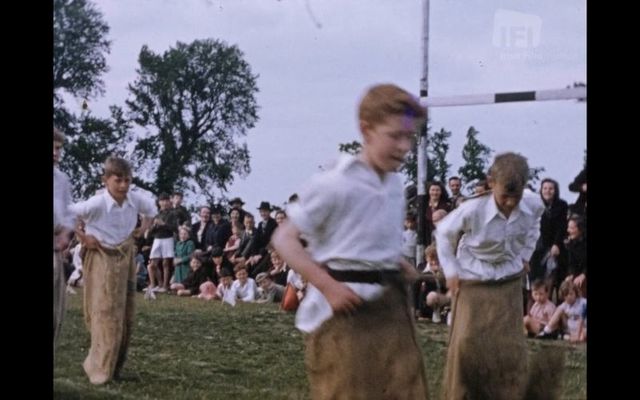 Summer, Killiney, South County Dublin: The CBS sports day is in full swing. A band plays and participants compete in boxing, cycling, and a sack race as crowds cheer from the stands. It’s clear that a fun day was had by all.

Father Jack Delany (1906-1980) was ordained in 1930 at the age of 24 and served as a parish priest in Dublin in the 1930s and 1940s. He served mainly around Seán McDermott Street (then Gloucester Street), Rutland Street and Gardiner Street. His films offer a fascinating glimpse of life at the time in inner-city Dublin and include scenes of trips with parishioners, tenement life, school children at play, religious processions, and residents of the Sisters of Our Lady of Charity Convent (which housed a Magdalene Laundry).

In the 1930s, Fr Delany was assigned to the north inner city parish which included Gloucester Street (now Seán MacDermott Street), Rutland Street, and Gardiner Street. It was an impoverished neighbourhood of densely populated tenements. Father Delany grew up in a middle-class family and had great admiration for residents of the inner-city, particularly admiring their sense of community and resilience in the face of hardship. His parishioners are the subject of many of his films and his films of tenement life provide us with a fascinating glimpse of life in 1930s inner city Dublin. These scenes include children playing in rubble, stall holders, clothes drying on the balconies of flats and residents of the Sisters of Our Lady of Charity Convent (which housed a Magdalene Laundry).

"Sports Day" is published here with kind permission of Irene Devitt and thanks to the Irish Film Institute (IFI), who IrishCentral has partnered up with throughout 2022 to bring you a taste of what their remarkable collection entails. You can find all IrishCentral articles and videos from the IFI here.