Irish model Sonny Drummond will be heading to Paris Fashion Week after his well-received debut on the Christian Dior catwalk in Egypt. 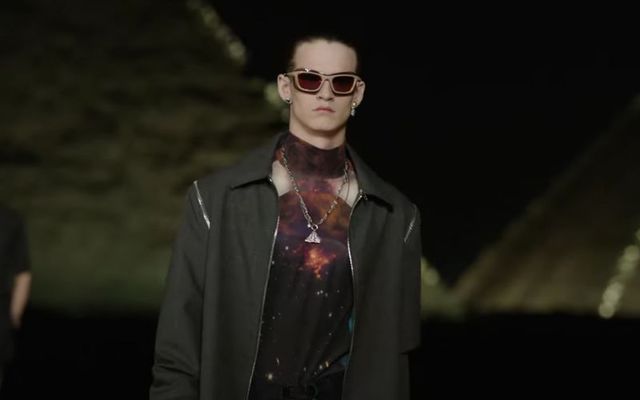 Sonny Drummond, a secondary student from Co Westmeath, made his modeling debut this month by posing for iconic fashion house Christian Dior in front of the Pyramids of Giza in Egypt.

Drummond, 17, a fifth-year student at Athlone Community College in Westmeath, was noticed by a scout for the renowned modeling agency Elite while attending the Longitude Music Festival in Marlay Park last July.

He told the Westmeath Independent that the scout took some pictures of him and left him his card but added that he didn't think anything would come of it.

However, the scout contacted him several days after the festival, asking him for more photographs and inviting him to come to London to pose for more photos.

Drummond signed a contract with the agency shortly afterward but refused to get carried away even after he was informed that Dior had expressed an interest in using him for a shoot.

"I thought it was a one-in-a-million shot," he told the  Westmeath Independent.

"One day I got into the car after school and Mum just told me I had been picked and that we were going to Egypt at the end of November for their show in front of the pyramids. I couldn't believe it."

Drummond set off with his mother Síabhra on November 28 and were greeted by a driver and bodyguard after arriving in Egypt.

They were put up in the five-star Ritz Carlton Hotel overlooking the River Nile as Drummond prepared to take part in the show celebrating Dior's 75th anniversary.

Massive congratulations to Sonny Drummond who starred on the catwalk for the Christian Dior Men Fall 2023 collection by Kim Jones at the monumental Giza pyramid complex in Egypt. pic.twitter.com/g56legny13

The Irish teen was among 75 models to take part in the show and described his nerves as he prepared to walk down the catwalk on Saturday, December 3.

"For someone who’d grown up in the middle of Ireland, living in Nike and Adidas and playing Gaelic football, it was one of the most insane things that’s ever happened to me," Drummond separately wrote for The Telegraph.

He revealed that he has received overwhelmingly positive feedback since taking part in the show and is now set to take part in Paris Fashion Week in January.

You can watch the Dior Men Fall 2023 Show, staged at the Pyramids of Giza and featuring Drummond, here: