Celebrating Irish icons, past and present from the Irish LGBTQ community for Pride. Here, a look at Dr. Lydia Foy. 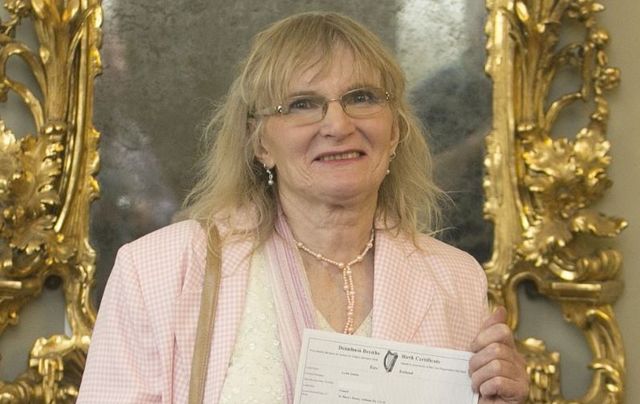 September 25, 2015: Dr. Lydia Foy, who was being honored by the European Parliament with the European Citizens Prize. RollingNews.ie

Dr. Lydia Foy has lived as a woman since 1991. In March 1993 she applied to the office of the Registrar General in Ireland for a new birth certificate to reflect her gender, but her request was refused.

This refusal led to several years worth of correspondence with the Registrar General’s office until in 1997 frustrated by the lack of progress, Dr. Foy initiated High Court proceedings to compel the Registrar to issue her with a new birth certificate.

Four years ago today transgender people in Ireland were finally granted legal gender recognition.
After 23 years of drawn out court battles taken on by the relentless Lydia Foy.
People like Lydia Foy are the reason I have a future. pic.twitter.com/j5hu9ZssaO

In October 2000, the case went before Mr. Justice Liam McKechnie in the High Court. Her claim was rejected in July 2002 due to the lack of Irish or UK legislation to facilitate what the Justice called the overturning of the existing jurisprudence. Justice McKechnie then called on the Irish government to address the question of urgently.

In 2017, after a 20-year battle, Dr. Foy finally received her new birth certificate. Thanks to her efforts and the efforts of others in Ireland's trans community Ireland now has one of the most progressive gender recognition laws in Europe.