Photographer Birte Kaufmann captured the lifestyle and culture of the Irish Travelling Community over four years in a rare look at the close-knit group. 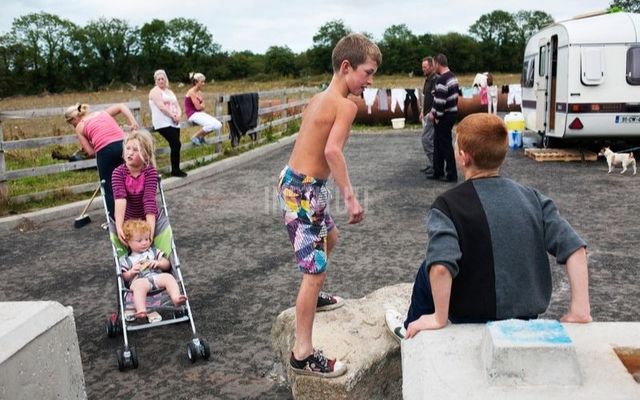 The family at a road camp at the backroads, County Carlow, Ireland BIRTE KAUFMANN, INSTITUTE

A German photographer spent the past four years gaining unprecedented access to the Travelling Community in Ireland, hoping to capture the lifestyle and culture of one of Ireland’s largest, and most discriminated against, ethnic groups.

Birte Kaufmann released her book titled The Travellers in 2017 of beautiful photographs shots she captured, while she was spending time with the close-knit community she first encountered while on a trip in the Irish countryside.

On meeting with a girl and her brother at a roadside camp during her first Irish trip, Kaufman was struck by the differences between Irish Travellers and the Romany camps she was accustomed to seeing elsewhere in Europe and wished to know more about this unique way of life.

"People said, 'You'll never get an insight into that community—forget about it,'" she told National Geographic. She was determined, however, and after failed attempts to gain access through a human rights group that works with the Travellers, she simply strode up to a halting site and explained to a young woman she met there that she was from Germany and wished to learn more about their culture.

The almost 30,000 Irish Travellers in Ireland are an ethnic minority known for their itinerant lifestyle. Travellers still adhere to a strict set of traditions that some outside the community feel are outdated and should be abandoned in a modern Ireland.

Although mostly English-speaking, they speak a range of different dialects including Shelta, Gammon (or Gamin) and Irish Traveller Cant. The majority are strict Roman Catholics. Teen marriage is very common among the community and some Traveller children can grow up outside the education system often as a result of discrimination on the part of schools.

In recent years there have been efforts to advance the integration of the Travelling Community with mainstream culture through education and housing. Human rights groups act as advocates for the Travellers seeking to have school rules on attendance enforced. These groups also help to settle families in government housing, although even “settled” Travellers often still meet with discrimination.

When Kaufmann first met with a woman at a halting site she was brought back to a caravan to meet the woman’s grandfather (probably because as a German she was a bit of a novelty), but they scoffed when she suggested the possibility of coming back.

But come back she did — with a camper van that would allow her to stay alongside the family, she wished to base her project on.

She still met with reluctance, however. She was a woman taking photographs in a society in which gender roles are still very clearly defined: women stay home and men rarely speak to women in public.

Slowly but surely she earned their trust, however, especially when one young mother taught her a few words of the Gambon dialect. This allowed her to show other, more cynical members of the community that one of their own had taken her into their confidence.

Kaufmann took pictures of the Travellers at work and at play and she found that their days included a lot of idle time, their way of life has been pushed aside in the new Ireland.

"The older generations can't read or write," Kaufmann said, "but they have their own intelligence. On the one hand, life was so sad and boring because everything their lives were stemming from wasn't there anymore. On the other hand, there was this freedom — they live their lives in their own way."

Over the course of four years, Kaufmann made many visits back to Ireland to call in on the same family and continue with her project, taking photos from the background and remaining an unobtrusive figure documenting the Traveller way of life. Then, one day, she found she wasn't taking any more photos and she knew that she had come to the end.

You can learn more about the project here.