"I never wrote about anything that was bitter or bad. I always told stories and I guess that is where my writing comes from." 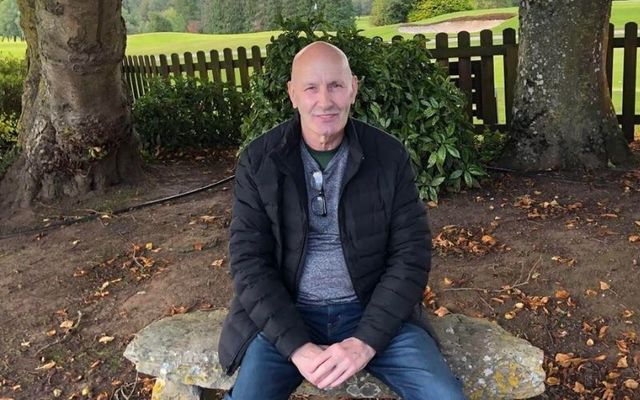 Pat Greene pictured in the grounds of the hotel at Ballykisteen, Tipperary, during his visit home from Brooklyn

Pat Greene has a story to tell... In fact, he has a lot of stories to tell. However, these are all 'feel-good' stories that Pat shares with his many followers on Facebook.

The Kilteely-Dromkeen native, who is resident in Brooklyn, New York, was 'holding court' at the Great National Ballykisteen Hotel, near Tipperary Town, so I went along to meet him to find out a bit more about his storytelling and the reasons why his stories are proving so popular with people. I began by asking Pat about his background in Kilteely.

"I grew up poor like many others of that time but from the time I was five years old I was a storyteller. I grew up in a house that told stories and while we were poor we were very well educated with books. My mother was an incredible reader and it passed down to all of us.

"When I was nine years old my teacher wrote on the blackboard 'Crossing the Line' and she asked the class to go home and over the weekend to write 500 words on 'Crossing the Line'. I was never much into school but for some reason, I couldn't get those words out of my head and coming home from school instead of playing hurling or football I was thinking of those words and that day when I got home from school I went up to my room and decided I was going to write a story on this.

"The words just flowed to me and instead of being 500 words it ended up being 10 pages long and I couldn't wait to get into school on Monday to hand up my story. I handed in the story to my teacher Mrs. Rice and the following morning she called me up and asked if I had written the story on my own and when I replied that I had, she called in all the students from the other classes and she read it aloud for everyone.

"The story touched the teacher and students so much that both she and the students cried. At 9 years of age it was a powerful feeling that I had the power within my own mind to make people cry without hurting them.

"From there on I started writing, beginning with pen pals that I got from 'Ireland's Own', and my letters to them were described by one pen pal from Santa Barbara in California as being "a big event in her household" and were read around the kitchen table with all her family present."

Now Pat's stories are to be found on his page on Facebook and having read many of them and scrolled through the comments from readers it is obvious that his stories strike a chord with so many people. I was intrigued to find out more so I asked Pat why he felt that this was the case.

"I never wrote about anything that was bitter or bad. I always told stories and I guess that is where my writing comes from. I worked in the Anner Hotel and in Hayes Hotel in Thurles and my thing was telling stories.

"I would wait until the end of the night and the staff would gather around me and I would tell stories. On one occasion when I worked in Hayes Hotel while I was cleaning the bar furniture I was chatting with the customers and telling them about the history of the hotel and the GAA being founded there and I told them a few different stories unaware that Pub Spy was in the bar.

"The following week the proprietor Mr. McCarthy called me up to the office and he showed me the paper and there Pub Spy had given a glowing report on his visit to the hotel with a special commendation for me and for my stories and he gave the hotel 5 stars. Because of that the proprietor gave me a raise of 5 pounds in my wages.

"Stories were always a big thing to me but I went away from my writing as then my life happened and I traveled to England and then to the USA. Then I met a lady in New York and I wrote a letter to her and after she received it she contacted me and said that I needed to be a writer and suggested that I should write a story.

That was the first time that I had written a story since I was 9 years of age. I discovered that I like writing fiction as fiction allows you to be freer. I can write a wholly fictional story and I don't have to hurt anyone's feelings.

Fiction helps me express myself in a way that I can reach out and attach myself to people and make them cry or make them laugh but when they cry it's a good cry. I have always been kind, my writing is my kindness and when people respond to my stories they say that they can feel my kindness and that means more to me than anything.

I am a storyteller that knows how to interact with people and reach out and touch people."

Pat has had some of his short stories published online but primarily his stories are to be found on his Facebook page. Pat says that he likes this medium as he answers each person individually who comments on his stories, and many of those people are queuing up to meet him in Ballykisteen to shake his hand as they feel that his stories have touched their lives. Pat says that he is really enjoying his writing and that it is not a hardship to him and in fact is therapeutic to him.

I was also interested to find out about Pat's connection to Tipperary and what draws him to Tipperary.

"First of all I grew up so close to Tipperary and I am a die-hard hurling fan and our biggest rivals have always been Tipperary. My uncle Frank used to play the accordion and he used to go over to Cullen and play music and he would bring me with him and we would have great friendly rivalry and banter with the Morrisseys and others in the pub there.

Many of my readers come from Tipperary and they are not just readers but they are really good friends. During my visit home I am staying here in Ballykisteen in Tipperary and it is close to Kilteely and I can go and visit my father who is 91 years of age (92 in February) and his sister who is 93."

Pat is hoping at some point to have his stories published in a book in New York so I asked him in conclusion as to how he would describe his stories.

"My stories are feel-good. That's all I want to be is a feel-good writer. Read my stories and feel good about people, feel good about life and never be disappointed. You might be disappointed with the ending as many of my stories do not have an ending. I leave them open on purpose. I don't want to finish them as I always feel I can come back to them and I want the reader to be able to finish the story themselves.

Every reader that will read a story of mine will find their own ending to every story. No two people will have the same ending and that's what makes it special. I want to be read everywhere, not for money, but because I can make people feel good.

I want people to familiarise themselves with the old Ireland that we grew up in and the great way that we had about feeling good about each other. I can't write a story without thinking about the wind and the rain. That's my inspiration and I believe that my stories come to me on the wind.