Kennedy's Irish ancestors left New Ross onboard the Dunbrody during the Irish Famine. 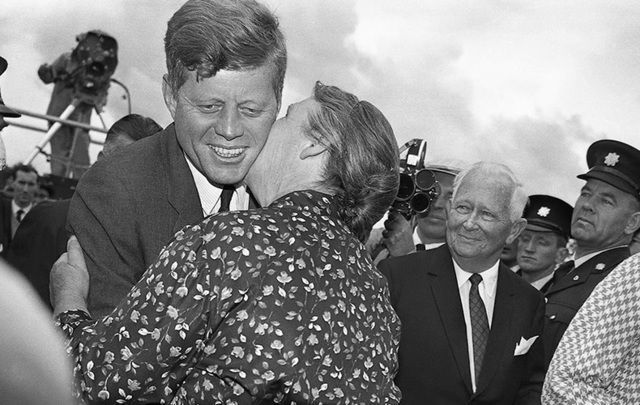 John F. Kennedy on his presidential visit to Ireland in 1963.

A new book telling the incredible story of how New Ross in Wexford put itself on the global tourism map thanks to its connection to the Kennedy Family ancestry has just been published by an Irish author.

"Dunbrody, A Famine Odyssey - How JFK’s roots helped to revive an Irish town" by Seán Reidy, who helped to build the replica of the famine ship that took John F. Kennedy's ancestors to America.

Reidy served as CEO for the Kennedy Trust, an organization founded in 1988 to commemorate Kennedy's Irish roots, for 23 years between 1991 and 2014.

Reidy, who was inspired by JFK as a 14-year-old child when the former President visited Ireland, fought desperately to bring New Ross out of a severe economic recession in the 1980s by capitalizing on the town's historic links to the Kennedy Family.

During his time as CEO of the Kennedy Trust, Reidy oversaw the completion of the Dunbrody Famine Ship and the Kennedy Homestead Visitor Centre in New Ross in addition to the Irish Emigration History Centre.

Reidy worked alongside a number of prominent Irish and American politicians, including members of Kennedy Family, to realize his dream of transforming New Ross into a prosperous town in the south-east of Ireland.

He worked with former Irish President Mary Robinson and former US President Bill Clinton in addition to prominent members of the Kennedy Family, such as former Senator Ted Kennedy and the recently deceased Jean Kennedy Smith, to turn the fortunes of New Ross around.

The author also worked with Joe Biden, Caroline Kennedy, and Chuck Feeney throughout his 23-year tenure as CEO of the Kennedy Trust.

His new 34-chapter hardback book, released this week, tells the fascinating story of how Reidy managed to win over these high-profile political figures and gain support for New Ross.

Reidy unveils the doubts and qualms, the sleepless nights and near-disasters, and the determination of the New Ross community during the construction of the full-scale replica of the Dunbrody.

"I am delighted to be sharing this incredible story; one of a town that came together and rallied to ensure it’s own future. The vision of building a full-scale replica Famine ship in 1991 was one some could call ‘crazy’ but it was a vision that the town got behind and helped to make happen," Reidy said at the launch of the book.

"Those times are not unlike the present day, the need to rally together to ensure the future of each of our own small towns and our country. This story is one of hope and tenacity and showcases what can be achieved when we pull together."

"Dunbrody, A Famine Odyssey" is now available in bookshops and online for €20, and can be purchased here.