Milwaukee Irish Fest 2019 will go down as one of my most-fun-filled weekends in the US.

In partnership with
Milwaukee Irish Fest 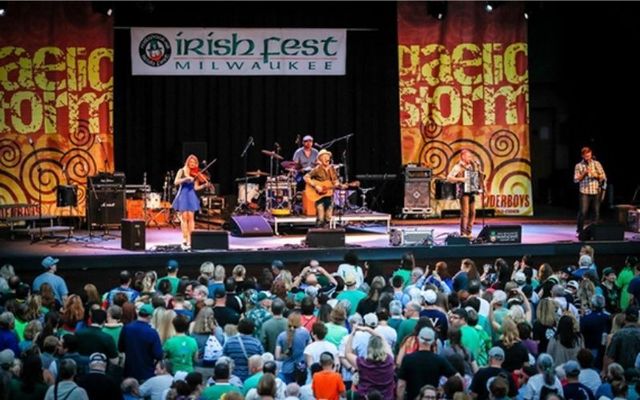 Milwaukee Irish Fest 2019 will go down as one of my most-fun-filled weekends in the US.

Since living in the US, I've spent many mid-August weekends glued to Fleadh TV, sad to be missing out on the music and the craic in Ireland but never expecting that just a short flight away from New York, I'd find its equal on this side of the Atlantic.

That all changed this summer, however, as I headed to the shores of Lake Michigan to attend my very first Milwaukee Irish Fest.

Ever eager to tick another US state off my list, a trip to the festival representing IrishCentral seemed like a great excuse to land in Wisconsin for the first time and if I got to experience some music and dance while I was there, that had to be a plus, right? Little did I know!

It's been almost a month since I headed off to Irish Fest and to be honest, it's only in the past few days that I've stopped telling people about it (and felt like I'd properly recovered from the lack of music in my life).

While friends who previously attended and performed there had tried to set me up for what I was about to experience that weekend, I could never be properly prepared or understand the magic of Irish Fest without witnessing first hand the sheer scale of what it achieves in bringing together all the very best elements of Ireland for their audience.

Between Thursday, August 15, and Sunday, August 18, 2019, over 100,000 festival-goers attended Milwaukee Irish Fest, with some 4,500 friendly and welcoming volunteers giving us a massive céad míle fáilte and helping to make Irish Fest a success.

Between Irish-born, those of Irish descent, and general lovers of Ireland, we met with many of you over the weekend, some having traveled quite a distance to be there. But it was clear what made any trip there worthwhile from the moment the first chords were struck up on Thursday night until the last bars of "Wild Mountain Thyme" were sung by the crowd gathered at The Scattering on Sunday evening.

Over the course of the weekend, every single person got their money's worth from the music alone, never mind from the stalls and stalls of Irish shopping, travel advice, Irish food, genealogy workshops, Irish language classes, cooking demonstrations and Gaelic games - to put just a dent in mapping out how much was happening in every corner of the festival.

Across the four days, over 100 acts played across 16 stages, including the likes of We Banjo 3, Seo Linn, Doolin’, Emma Langford, Aoife Scott, Hermitage Green, among many more. These also included over 14 emerging artists from Ireland, Canada and the U.S. who like me made their Milwaukee Irish Fest debut, and found themselves now among some of my favorite Irish acts.

Settle in and enjoy as we join Irish singer-songwriter Susan O'Neil live on Temple Bar TradFest The Snug stage at Milwaukee Irish Fest! Where are you watching from?

A particular highlight of the weekend in terms of music, however, came on Saturday night as The Best of Irish Rock Show with We Banjo 3, Skerryvore & Friends paid tribute to some of Ireland’s finest Irish rock bands and singer-songwriters. We were there with IrishCentral to bring a live stream to our readers as over 48 musicians joined together to sing songs of U2, The Cranberries, Sinead O’Connor, Glen Hansard and more. (We have a hard life, we know!)

Are you ready to rock? We were live at Milwaukee Irish Fest where We Banjo 3 and friends took us on a tour of the best of Irish rock music.

Throughout the weekend, we were also fortunate enough to be placed alongside the contingent from Galway 2020, European Capital of Culture, who was presenting a showcase at Irish Fest that included over 30 Galway representatives, plus 5 artists on their very own stage.

Although it may be hard to beat my first experience of Irish Fest, I may have timed my debut quite well as the return next year will also bring me to the 40th anniversary of the festival, which is sure to be one for the ages.

We'll see you there!

Be sure to follow Milwaukee Irish Fest on their social channels and sign-up for their email newsletter to be the first to hear about bands and special programs! The 2020 Milwaukee Irish Fest will take place August 13 through 16 at the Henry Maier Festival Park, in Milwaukee, Wisconsin.