“In the Light of a Shadow” at the Massachusetts Museum of Contemporary Art was inspired by protests in Northern Ireland and America following "Bloody Sundays" in Derry and Selma. 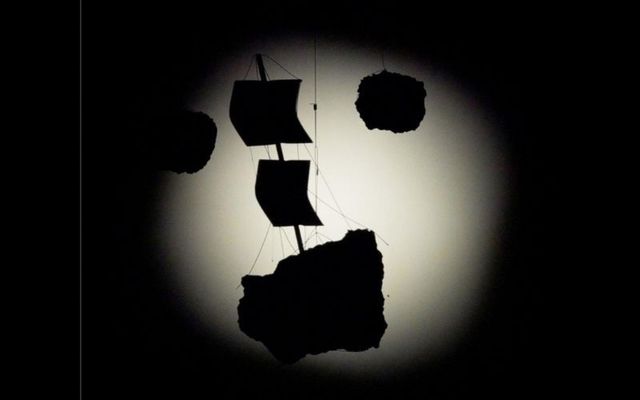 Glenn Kaino’s exhibit at the Massachusetts Museum of Contemporary Art.

And it would have been a compliment.

Like, so many of us have troubles, right? Let’s build some bridges to overcome them, right?

These days? Not so much.

Because some people will scream and yell that the Irish were oppressed too. They were even slaves! I saw it on Facebook! But they got over it!

And other folks will scream that Asian Americans have no right to tell the story of African Americans in the Jim Crow south, who should not tangle up their story with conformist, homophobic, oppressive, pedophile-coddling Catholics.

In the face of such noise, artist Glenn Kaino went ahead and tried to tell his story anyway.

It’s called “In the Light of a Shadow,” at the Massachusetts Museum of Contemporary Art, and should that be one of the first places you choose to wander in post-Covid life.

Kaino’s exhibit, organizers say, was “inspired by the connection between protests across the globe, specifically those in response to the tragic events known as Bloody Sunday from Selma, Alabama and Derry, Northern Ireland.”

The exhibit is roughly the size of a football field and takes up “the entirety of MASS MoCA’s ... Building 5 gallery (and) explores the power of collective action in forging a more just world.”

Such cross-cultural quests for justice once seemed almost daring, not least because Irish Catholics (in the U.S., anyway) were, shall we say, inconsistent allies during the 1960s African American fight for civil rights.

All the more so since “Light of a Shadow” also includes “a circular sculpture made of metal bars, which, when struck in sequence with a baton, play the melody from U2’s ‘Sunday Bloody Sunday.’”

Organizers say this “transform(s) a barrier into a plea for violence, protest, and civil rights infractions to end. Alongside the sculpture will play a video that Kaino recorded with Deon Jones, an activist and singer who was brutalized by the police while protesting the murder of George Floyd.”

Kaino certainly leans towards the kitchen-sink approach to social justice -- throw lots of stuff in and hope something connects.

This is why perhaps the most interesting thing in Kaino’s exhibit is “a sculpture of the Shadow V, the boat carrying Lord Mountbatten that was bombed by the Irish Republican Army in 1979, killing him and three others,” as The New York Times describes it, adding, “But the boat, made of steel and wood, has been curved into a version of an ouroboros -- the snake that eats its own tail.”

Well, this is not a rebel song, indeed!

According to the Times, Kaino’s exhibit “makes a connection between the Civil Rights movement in the United States, up to and including Black Lives Matter, and the continuing conflict over Northern Irish independence from the United Kingdom, particularly the three-decade period of violence known as the Troubles.”

Kaino himself says, “The thread is that the struggle for equality is universal.”

Well, that certainly seems reasonable. Who could have a problem with that?

But then? Uh oh. More trouble.

The Times feels the need to emphasize that Kaino is also “noting that he wasn’t equating the causes.”

So, these struggles are “universal.” But don’t go “equating” them.

It may be worth mentioning here that as his most famous speech reached its crescendo, Martin Luther King alluded to freedom in “every village and every hamlet,” for “black men and white men,” as well as “Protestants and Catholics.”

Celebrate an Irish Christmas at home or abroad with this festive programme
Titanic struck fatal iceberg despite receiving warnings
WATCH: Irish schoolgirl singing "Hallelujah" remains a sensation
When Marilyn Monroe called Jackie to speak about her affair with John F Kennedy
The 11 worst Santa Claus and Christmas jokes of all time
Irish hardware store's Christmas commercial will leave you close to tears
A hard Christmas it was in London in the 1960s
10 facts you probably didn’t know about Ireland during the holidays
IrishCentral Book Club's ultimate Irish reading list