Mary O’Halloran of Mary O's Irish pub in New York City is set to rekindle Humans of New York's Christmas dinner for those who have nowhere to go this year. 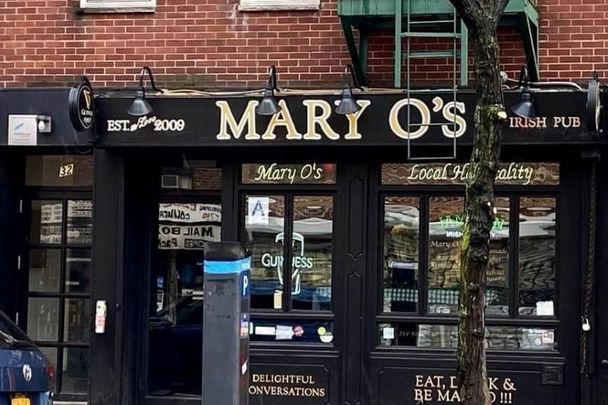 Mary O’Halloran, the Irish proprietor of Mary O’s in New York City who went viral in 2021 when she was featured on the popular Humans of New York (HONY) project, has offered to host dinner for those alone this Christmas.

“Our patron saint Mary O has decided to host her own HONY for the Holidays Dinner at @maryosirishpub this year, on Christmas Day,” HONY’s mastermind Brandon Stanton revealed on Instagram on December 15.

“And boy is she excited. Giddy, really. Rarely is Mary not merry. But this is a very merry, very cheery Mary. In fact, I'm 90 percent sure she's crying right now as she reads this.”

Stanton explained how in the early days of his HONY project, he and his wife Erin launched ‘HONY For The Holidays’ where they’d match up people who had nowhere to go for Christmas with people who had an extra place at their table.

However, as their own family grew, the Stantons’ ‘HONY For the Holidays’ undertaking “flickered out.”

But thanks to Irish woman Mary O'Halloran, the flame has been relit.

“Mary would like to invite anyone who has nowhere to go this Christmas to join her for this magical event," Stanton said on Instagram.

“There is currently room for 45 people. That was Mary O’s idea, because: ‘It’s not a round number. And that makes it seem like really something. Ya know?’

“She will be cooking herself. I tried to force catering on her because she’s STILL baking scones 18 hours a day, but she said: ‘That just doesn't feel right. It wouldn’t be the same, ya know?’ (This is coincidentally the same reason she gave for baking one million scones herself. She's nearly 80 percent through, for anyone still waiting: 'But my hand has touched each one.')⁣

⁣“If for any reason you find yourself alone this holiday season, and are in the NYC area, please email a little about yourself and your situation to honyassist@gmail.com. And we'll try to get you a spot at Mary O's. We'll fit as many as we can.”

A post shared by Humans of New York (@humansofny)

Back in 2021, O'Halloran went viral after being featured on Humans of New York. The Co Mayo native, a mother of six, said in her HONY segment how she turned to cooking traditional Irish food, including scones, to help make ends meet when her New York City pub and restaurant was forced to shutter amidst the pandemic.

When her scone-making saga was featured on local outlet NY1, "It created big scone hype for a few months,” O’Halloran told HONY in August 2021.

“It wasn’t a ton of money," she told HONY. "I was only making $1800 for 100 boxes of scones. It wasn’t paying rent or anything. But it was something to do, you know? I finally found something that was working. People were writing notes, saying: ‘I gave these to my grandmother, and she loved them.’”⁣

“We got shut down two days before St. Patrick’s Day. Always the biggest day for an Irish bar. My husband is a...

Wanting to help the inspiring Irish woman, Stanton launched an online shop where people could order O’Halloran’s “magical” Irish scones. For $30, customers could get an order of scones, as well as a drawing from O’Halloran’s daughter Erinn.

Additionally, “each box will also include an invisible Irish blessing that will be passed down through the generations to all of your descendants until the end of the time,” Stanton said.

The results were staggering. Within 24 hours of Stanton sharing O’Halloran’s story on HONY, orders came in for some $1,000,000 worth of soda bread scones.

Mary O’Halloran. Queen of the Mary O's Irish Pub. Mother of six and ninth of her name. Hailing from the rolling green hills of County Mayo, Ireland. Has recently accepted a divine mission to prepare 200,000 Irish scones to grace the tables and fill the stomachs of HONY folk across the land. Last Friday 20,000 lbs. of the purest Odlum’s self-raising Irish flour was delivered on a sturdy ship from Dublin. Over the next two months it will be magically transformed into scones, using the ‘gigantic ovens’ in the basement kitchen of St. Francis Xavier Church. Queen Mary has given assurance that her hand will touch every bowl of flour. But the process will be supervised by ‘six rock-solid Irish Mammies,’ whose ‘kids are grown,’ and ‘know how to follow a recipe.’ Afterward the scones will be joined with 7,000 lbs of homemade blackberry jam, placed into boxes by an army of volunteers, and dispatched on horseback across the land. BUT FIRST, and as promised, the flour was infused by with an Irish blessing by Mary herself, in an ancient ceremony featuring electric candles. The blessing will immediately be activated upon ingestion of a scone. In conclusion— thank you for your patience. Have mercy on this dearly loved woman. And if you’re ever in the city, go get a pint at 32 Avenue A.