After becoming the first Irish person to sing at the Panthéon in Paris, Maria Doyle-Cuche will sing a special tribute to fellow Irish woman Margaret Kelly, aka Miss Bluebell, this month. 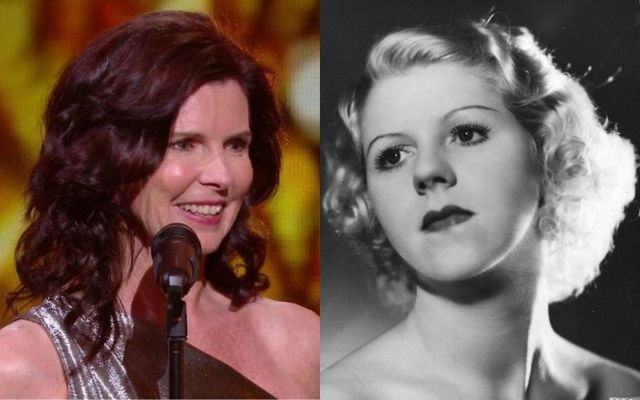 Feistiness and a fighting Irish spirit transcend the barriers of time linking Irish singer and author Maria Doyle-Cuche with Irish woman Margaret Kelly (1910-2004) aka 'Miss Bluebell' of the Lido cabaret in Paris.

Maria Doyle was born in a Magdalene Laundry in Ireland. Blind since she was nine, she is the author of the 2018 autobiographical book entitled "On ne voit bien qu’avec le cœur" (One Can Only Truly See with the Heart).

When she was ten, Doyle was sent to a boarding school for the blind in Co Dublin. She refused to settle for a life labeled as a “blind child” and made her escape. Despite her lack of eyesight, she found her own way home, traveling over 50 miles to Dundalk. Unheeding others’ opinions, young Maria knew that her voice was a force, “a gift”, and she had the solid conviction that she was on a path to stardom.

However, who could have predicted that Doyle would be the first Irish person to bring the roof down of the Panthéon in Paris?

In 2020, Doyle became Godmother of the French association “Unadev” (the National Union of the Blind and Visually Impaired). She has now been nominated to sing at a closing ceremony in the Pantheon for the 70th anniversary of the Pantheonization of Louis Braille on June 22.

Singing acapella, her fabulous voice will fill the huge edifice, also honoring the ghosts of 81 of France’s most eminent people who are buried there, including Victor Hugo, Marie Curie, Simone Veil, and Voltaire.

At 5 pm the following day, June 23, in an event organized by myself, Doyle will lay bluebells and once again sing "Ave Maria" at Margaret Kelly’s tomb in Montmartre cemetery in homage to her feisty countrywoman.

On this occasion, the eve of Kelly’s “111th” birthday, Doyle will be dressed by Sean Byrne, an Irish fashion designer based in Paris, in a dress created in homage to Kelly. Byrne’s dress honoring Kelly conceals in its folds the lucky triple 1 number, initially perceived as a good augury for Kelly’s Bluebell Lido legacy.

The day will continue in song and dance, meeting Parisian cabaret dancers and musicians, as the merry band wanders on to the Café Blanche, 79 rue Blanche, just a couple of doors up from where Kelly lived at #83.

A joyous memorial celebration, even while mourning the fate of Kelly’s beloved Bluebells and the forthcoming closure of the Lido, Kelly’s “home” from 1948 up to when she was in her nineties.

Many French people and tourists alike regret the “hole” that the Lido's closure will leave on the once-glamorous Champs Elysées. Almost 200 Lido employees,  including the fabulous Bluebells, first choreographed by 'Miss Bluebell' Kelly, are to be laid off.

However, the Bluebells, as true artists, are doing Miss Bluebell proud, holding their heads and legs high until the finish line, celebrating what she created until the final curtain call. They will shine and sell dreams until the last, star-struck audience stumbles out on the Champs Elysées, confused as to why such “magic” has to end.

So many parallels can be drawn between Maria Doyle and Margaret Kelly, both born in Ireland with the odds stacked against them.

Both were rescued not long after birth by strong Irish women - Doyle’s grandmother plucked baby Maria and her mother Eileen by force from the Magdalene Laundry and in Kelly’s case, it was a spinster seamstress, Mary Murphy, who took abandoned baby Kelly on.

Kelly and Doyle were both raised in working-class backgrounds and left school at 14 and 13 respectively. Today, they represent unedifying pasts - France under the occupation and Ireland's Magdalene Laundries.

Kelly and Doyle love(d) people, their children (four for Kelly and seven for Doyle), music and dance, and perhaps that zest for life, along with talent and hard work, also contributed to their success.

Through love and destiny, both ladies ended up living in France for most of their lives.

Replications of the four medals Kelly was decorated with adorn her grave, including “Knight of the Legion of Honor” for her 72 years as a dance mistress.

Doyle has also been decorated twice already; she was awarded both France’s “Médaille de l'Honneur” and the “Medal for Devotion” (Académie de Stanislas).

Both women have been defined by their talent - Kelly for dancing and choreography and founding the Lido’s Bluebell troupe and Doyle for singing, composing, and penmanship.

They're known today for their beauty, feistiness, intelligence, and gift of repartee, the incredible odds they overcame, an uncanny ability to turn a “weakness” into a strength, their kindness, and an aptitude to ignite the core in others. Both women have also been very much defined by their eyes.

However, with the recently announced closure of the famous Paris cabaret The Lido, that harbinger of good times seems to have backfired.

Kelly was born in Dublin. After the Easter Rising in 1916, Mary Murphy, her “surrogate mother”, took her to live in safer Liverpool.

Murphy sent Kelly to ballet lessons to strengthen her spindly legs and at 14 years old, Kelly was already a professional dancer. Her work took her to Europe. When she was 22, a scout for the Folies Bergères, impressed by her talent and long legs, recruited her initially as a dancer, and later she became a choreographer, at the Folies Bergères. In 1948, Kelly and her Bluebell troupe moved on to the Lido.

The feisty Kelly survived sequestration while pregnant in the British Women’s internment camp in Besançon during WWII. She held a British passport at the time, but luckily, the Irish legation in Paris fought to have her Irish nationality and neutrality recognized and got her released.

Her husband, Marcel Leibovici, a Rumanian half-Jewish orchestra director, was later apprehended and placed in an internment camp in the Pyrenees. The French resistance helped him escape and Kelly hid him in an attic for two and a half years during the occupation, keeping his whereabouts secret despite being interrogated by the Gestapo.

Days before the Allied liberation of Paris, Kelly was also caught for a half-hour in crossfire between German troops and resistance fighters in the Place de la Concorde (August 1944), but she survived that as she survived many setbacks in her long life. When introducing herself to people, Kelly often warned them, “I’m a character - you know I’m Irish!”

Doyle motivates people: “Listen, if a little blind girl of nine could go on to do what I did – so can you”.

Margaret Kelly and Maria Doyle, women who followed their own stars, and just scintillated! Two of Ireland’s best “ambassadors” to France, and another reason why the French are so intrigued by the birthplace of these women, cut from such a resistant, inspirational, creative cloth.

(Sean Byrne’s dress will also be showcased later this year in Lisdoonvarna, symbolizing a fabulous Franco/Irish link in music and dance. You can follow him on Instagram at @SeanByrneFashionDesigner.)