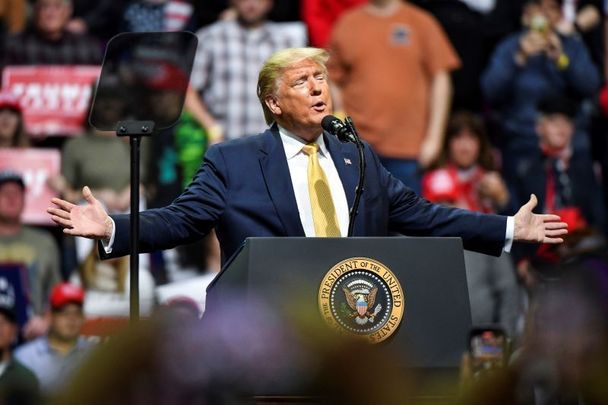 Trump is a big fan of the new play Getty Images

Two Irish writers met with Donald Trump in the Oval Office to talk about their new play which focuses on texts between then-FBI special agent Peter Strzok and then-FBI lawyer Lisa Page, two investigators who exchanged anti-Trump texts while probing Russian collusion in his campaign.

The short play, "FBI Lovebirds: UnderCovers", was written by Phelim McAleer and Ann McElhinney and features Dean Cain as Strzok and Kristy Swanson as Page, all of whom identify as conservative.

The US President is reportedly a big fan of the production. McElhinney, speaking at the Conservative Political Action Conference, said that Trump "loved" the play. The play premiered at the conference.

“We met the president of the United States today in the Oval Office for 40 minutes, today,” she said. "He loves the play."

Both Swanson and Cain said that Trump expressed an interest in featuring in the production, according to the Washington Examiner.

“He said he wants to play a part,” Swanson said.

“He said he’d be my understudy,” Cain said.

Peter Strzok and Lisa Page have become something of an obsession for Trump and his supporters.

Strzok helped lead the FBI investigation into Hillary Clinton's email server in 2016 and also investigated potential collusion between the Russian Government and the Trump campaign. 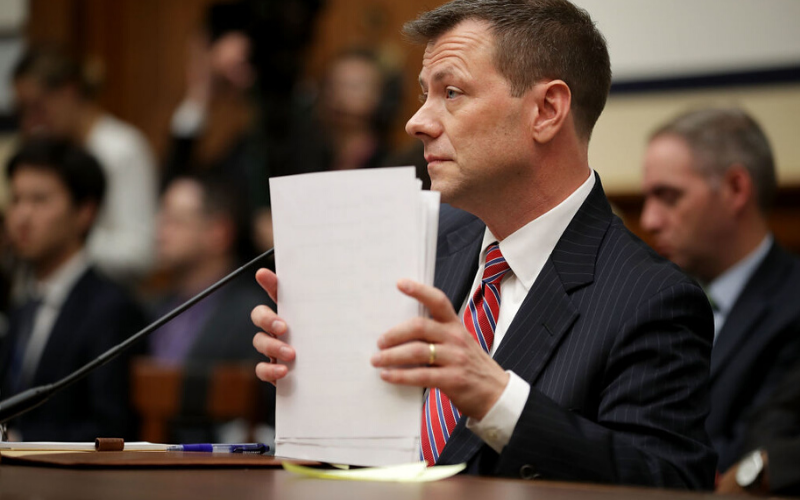 He worked briefly on Robert Mueller's investigation into Russian collusion before he was removed when Mueller became aware of anti-Trump text messages he sent to Page, with whom he was allegedly having an affair.

Trump supporters argue that the texts are proof of a 'deep state' conspiracy to prevent the current US President from taking office.

One of the most controversial texts came after Page asked Strzok if Trump could ever be elected president, to which Strzok replied: "No. No, he won’t. We’ll stop it.”

FBI Director David Bowdich fired Strzok in August 2018 for his anti-Trump messages and Strzok has since filed a wrongful termination suit against the Bureau. He contends that the text messages were protected political speech.

In December 2019, the Justice Department inspector general found that Strzok was not motivated by bias in his investigations.

The play is a dramatized reading of texts between Page and Strzok and centers around their congressional hearings.

During a Q and A session at the Conservative Political Action Conference, Cain said that he posted little pictures of Strzok in his script to remind him of the faces he pulled during the hearing and included a smirk in his portrayal of Strzok.

Cain is best known for his performance as Clark Kent/Superman in the 1990s show 'Lois and Clark,' while Swanson is known for her portrayal of Buffy Summers in the movie 'Buffy the Vampire Slayer,' which preceded the popular TV show of the same name.

Trump has singled out Strzok and Page for some particularly harsh criticism in the past.

At a rally in Minneapolis in October last year, Trump mocked page by performing a fake orgasm which drew cheers and laughter from his supporters.

When Trump was cleared by the US Senate in his impeachment trial, he again attacked the pair in his celebratory speech.

"I can tell you, in my opinion, these are the crookedest, most dishonest, dirtiest people I've ever seen."

Page Tweeted in December that she had been subjected to vitriolic comments from Trump supporters because she was both a woman and a former FBI employee.

"I am not just an FBI target of the President, but a female one. So his followers understand that I'm therefore different, and "deserving" of a special kind of hatred, a vile reduction of my whole existence into body parts and sex acts."

Plus one big difference: I am not just an FBI target of the President, but a female one. So his followers understand that I'm therefore different, and "deserving" of a special kind of hatred, a vile reduction of my whole existence into body parts and sex acts.