Though the popularity of these stunning dog breeds has grown around the world, it is Ireland that's their true home. 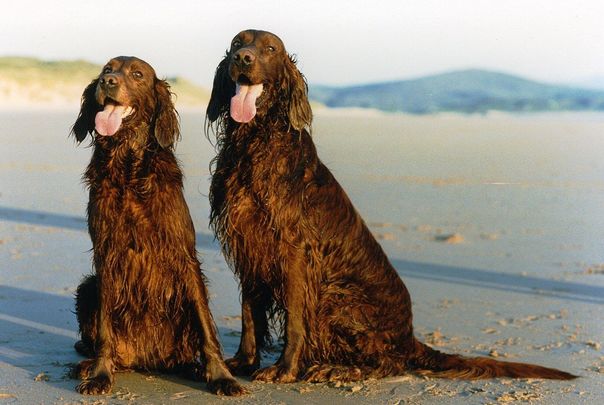 These dogs, native to Ireland, have become more and more popular throughout the world but you might not believe that these dogs are Irish at heart.

Shamrocks, pints of Guinness, and the Celtic Cross may be the things that spring to mind when you think of Ireland. However, this North Atlantic island laying off the coast of the mainland UK is so much more. From the beauty of the landscape to the medieval buildings, this is an enchanted place that will capture your imagination while rejuvenating your soul.

Within the mountains, woods, and plains of Ireland, nine native dogs have been developed through the centuries. And though their popularity has grown throughout the world, it is Ireland that's their true home.

Developed as a working dog for hunting game, the history of Irish Red Setter causes much speculation. It's known that an Irish Red and White Setter was bred to a solid red dog but just which dog that was, we don't know. What we do know is that by the 18th century, the Irish Red Setter was well established as a breed.

This is a hardy dog who can work all day in the field, and with their outgoing and exuberant personalities also make for an excellent family dog.

This hardy little dog earned his keep by keeping rodents out of the home and hunting down foxes and badgers. Strong and independent, they are still tenacious hunters given a chance. Their name comes from the area in which they originated, a remote valley in the Western Wicklow Mountains. It’s thought that settlers brought the dogs to the area and that they then began to breed with the local canines, finally developing the Glen of Imaal Terrier.

This is a rare breed though they are gaining popularity, and that's not surprising when you consider their unique combination of intelligence, loyalty, and patience.

This may be a new breed to you, and that's because we've become much more familiar with the Red Setter than the Red and White variety. In fact, these almost became extinct in the late 19th century, and it took their fans over fifty years to revive the breed. The Red, and the Red and White, are now considered to be two quite separate breeds.

As well as their stunning appearance, these are very able workers, and many now successfully compete in Field Trials and work in the field.

Known as the Wheaten for short, this versatile farm dog not only kept the home rodent-free but also hunted and helped guard the property. Little is known of the Wheaten’s history, but it’s thought that they probably came to be from crossing the Kerry Blue and Irish Terriers.

The Wheaten is now known for being a happy and steady breed. They're not as intense as many terriers though they still have that strong hunting trait. And while they'll bark at intruders, it's unlikely that they'll show any aggression.

A post shared by Flynn The Red Devil Dog (@the_irish_flynnvasion)

It's thought that the Irish Terrier is the oldest of the Irish terrier breeds. However, with few records, it isn't very easy to know for sure. The breed has been through a few variations in color with the brindle, and black and tan were bred out during the 19th century.

The breed came to fame during the First World War when they were used as messenger dogs within the terrifying noise and chaos of the trenches, a fantastic demonstration of their intelligence and bravery. Now they are best known for being a great family companion who is both good-natured and playful.

Originating from dogs who came from Persia via Spain, the Water Spaniel was first referenced in Ireland, going all the way back to 1600. Their unique hairless tail, which is seen in no other breed, gave rise to their nicknames of 'Whip Tail' and 'Rat Tail.'

Often mistaken for a large brown poodle with its distinctive top knot and curly hair, this is a versatile working dog who can hunt, point, and retrieve. As suggested by their name, they are strong swimmers and excel at retrieving waterfowl. When not working, they're well known for their sense of humor and clownish ways, making them an excellent choice for an active family. 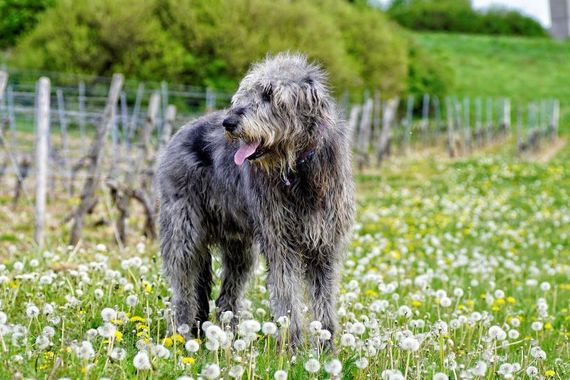 The imposing Irish Wolfhound was first used as a war dog, charged with dragging men down from their horses or chariots. Prized for their ferocity and bravery, they were also hunters of large game such as boar and wolves, and guardians of both home and livestock. This is a breed that was held in such high esteem that legislation was passed to allow only kings and nobility to own one.

The Irish Wolfhound is the tallest of all dog breeds, and they are now well known as being gentle giants who pretty much get along with everyone. No longer a breed to take on the role of watchdog, they rarely show any aggression, though their sheer size might deter unwelcome visitors!

Dating back to the 16th century, the Kerry Beagle is one of the oldest Irish hounds. While the breed's exact origins are a little murky, one legend tells of Noah's ark coming to rest in Tipperary. Two black and tan hounds then leaped off to chase a fox and never returned, and it was these two dogs that became the first Kerry Beagles!

While the breed can make a great pet, the biggest challenge will be in finding one to join your family. The breed is now classed as a vulnerable native breed due to its very low numbers.

The Kerry Blue has been hard at work in Ireland for centuries, even though there are few references to them before the 1900s. Bred to hunt small game and birds along with killing rodents, they were also able to turn their paw to herding sheep and cattle.

Even today the Kerry Blue is an athletic breed with loads of energy and stamina. When combined with a strong streak of independence and terrier tenacity, you need to do your homework before taking one on!

WATCH: The beauty of the Mayo along Ireland’s Wild Atlantic Way