The Irish Wolfhound is a historic sighthound dog breed that has, by its presence and substantial size, inspired literature, poetry, and mythology. 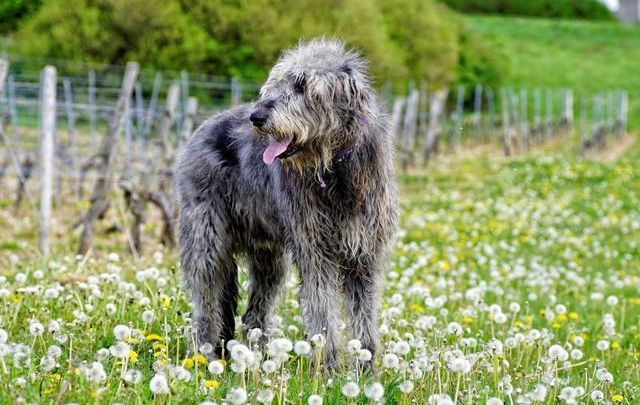 The Irish Wolfhound: From how Oliver Cromwell saved the massive breed, to the fighting alongside men in battle. Getty Images

How much do you know about Irish Wolfhounds, the giant hound from Ireland?

Here are ten snippets of history and fun facts you might not have known about the Irish wolfhound breed:

1. The Irish wolfhound was originally a war dog used to drag men off horseback or off chariots.

2. The breed was also used as a hunting dog and a guard dog. They hunted wolves and elks when they were abundant in Ireland.

3. Oliver Cromwell saved the Irish wolfhound by refusing to allow the export of any more from Ireland after their numbers dwindled.

4. In the mid-1800s, Captain George Augustus brought the breed back from the verge of extinction by cross-breeding wolfhounds with deerhounds, great Danes, and mastiffs.

5. The pure Irish wolfhound comes in various colors, from cream to black. Wheatens, reds of various shades, and greys from pale silver to slate are included, either with or without brindling. White on tip of tail and feet (and legs) is acceptable, but excess white spotting (blaze or collar) is not.

6. There is also a color in the breed that is considered impermissible – blue. In the past, if this color occurred the affected puppies were put down at birth or as soon after as their color became obvious.

7. Wolfhounds usually adore children. However, they are not always good with other animals, especially smaller ones, due to their hunting instinct.

8. The Royal Irish Regiment, Prince William’s regiment, in the British Army has a wolfhound as its mascot.

9. They are sometimes used in Scotland for herding sheep and are said to be almost as good as the border collies.

10. They are not considered the brightest of dogs, compared to border collies or other breeds.

Here's a clip about Irish wolfhounds: