How Ireland has attracted American mystery writers to grace its shores

What is it that makes Ireland such an enticing destination for mystery fiction writers from America? 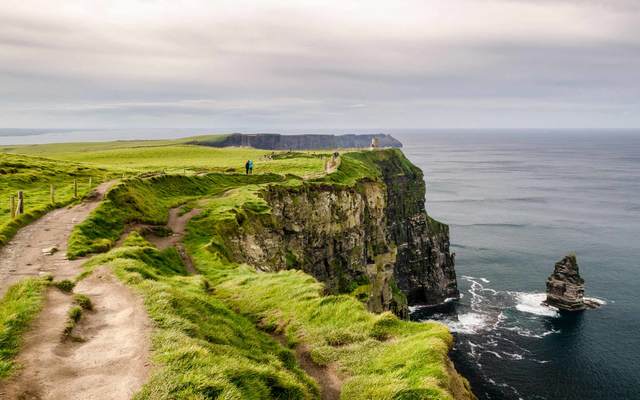 With views like this as a setting for your intrigue, is it any wonder that Ireland is an ideal setting for mystery writers? Getty

Ireland is famed as the land of storytellers from James Joyce to Tara French. But it isn’t just a place for native-born writers to set their tales, the country also draws American writers who want to take advantage of the scenery, the people, and the history as a backdrop for their books.

Tell me a bit about your books:

Lisa: I write psychological, atmospheric crime fiction. There are three books in the County Clare series, thus far (hopefully more to come!), and they follow Merrit, an ex-pat American, who has just traveled to Clare as the first novel, Kilmoon, begins. She’s there to find her biological father and finally get some answers about her family’s murky past. She gets dragged into a murder investigation.

Sheila: I started writing in 2001 after I’d been laid off from a job that I thought would last for years. Suddenly I had a lot of free time, so I decided to try writing. While the County Cork Mysteries didn’t appear in print until 2013, one of the first books I ever completed (in 2001) was set in Leap, in a small pub there. I could never let go of it. The characters and plots changed as I reworked it over the years, but never the setting—I knew I wanted to use that.

How Irish are you?

Sheila: Funny you should ask—a few months ago I would have given a different answer. Both of my father’s parents were born in Ireland, in Carlow and Cork, and arrived in New York in the same year, 1911. I was pretty sure I knew that was half of my gene pool.

But I’ve been a genealogist for many years, both for myself and for hire, and a couple of years ago I thought it was time to try one of the paid DNA tests, to see if the results matched what I thought I knew. Big surprise: it came back that I was actually 3/4 Irish, with a dash of Scandinavian (a few Vikings, I assume).

Lisa: O’Brien! That’s my dad’s side. My mom’s side it a bit more mongrel with Irish in there, too. I’m an American mutt, but within my family culture, I relate to my Irish heritage because I take after my grandma O’Brien with my coloring (brown hair, fair skin, freckles, blue eyes) and, also, apparently, my temperament—a little feisty.

Read more: Is this the best little bookstore in Ireland?

Why did you choose Ireland as a backdrop?

Lisa: I’d been curious about my Irish side because it was the strongest influence on the family—everything else (some German, some English) felt watered down by comparison. This is especially true because I never got a chance to meet Granny O’Brien. The stories about her were larger-than-life and full of the storytelling malarkey that I perceived as quirkily Irish in nature. I mean, come on, as compared to the pragmatic German side and the upright English side? How could I not relate to her?

Anyhow, being interested in Ireland, I read a book called "Whoredom in Kimmage" by Rosemary Mahoney and fell in love with her descriptions of Clare. This was about the same time I was experimenting with my first novel. The descriptions and sense of Clare from the book inspired some aspects of that novel.

Sheila: That’s easy: I fell in love with the place. My husband and I took our daughter—then 13—to England, Ireland, and Wales one summer, and we didn’t allow a lot of time for any serious family research. We pulled into Leap late in the day, without any reservation booked. It was pouring rain, but the hotel owner said she knew someone nearby who had a couple of rooms available, so we ended up there.

The next morning I woke early (my first day in Ireland!), opened the curtains, and was met with a view of Glandore Harbour, with swans drifting by, and cows on the meadow across the harbor, and it said “home” to me. And when after breakfast we climbed up to the main road to explore the town, on the other side of the road was Connolly’s pub. That sealed the deal.

Why Cork (Sheila) and Clare (Lisa)?

Sheila: My father’s family came from West Cork, north-east of Skibbereen. We stopped in Carlow town on the way toward Cork, but it didn’t impress me. West Cork, on the other hand, turned out to be everything I’d hoped Ireland would be—friendly people (including a few relatives), beautiful country, good food (which has been improving steadily since I first visited), and a fascinating mix of ancient and modern, like 300-year-old buildings with satellite dishes.

Lisa: "Whoredom in Kimmage" started me on the journey, for sure, but this doesn’t explain why my storytelling remained in Clare. That first novel never got published, you see—one of those fledgling first efforts. What happened was that I traveled to Ireland to research that novel, and while on that trip there got inspired for the story that would become Kilmoon, which would lead to "Whispers in the Mist" and "Path Into Darkness."

What kind of research do you do?

Lisa: One of my best techniques is to belly up to the bar, and drink pints and gab with the locals. For one thing, that helps with my Irish ear for dialogue; for another, I can ask random but pertinent research questions about everyday life stuff. I always have a few local spots that become my haunts so I can get to know the bartenders and regulars. During my last visit these were Roadside Tavern, Lisdoonvarna, and Cooley House, Ennistymon.

For more knowledge-specialized research, I make a list of everything I need to know: medical questions, police procedural questions, and so on—and once I get to Clare, put an ear to the phone and feet to ground and pedal to metal doing good, old-fashioned on-the-ground research. Lots of driving and getting lost and false leads, but it’s all part of the fun.

I found the medical research difficult because the health care system in Ireland befuddled me every step of the way. For Garda information, it was a matter of visiting local Garda stations. The detectives I spoke to were very helpful. One gave me a tour of the station, and the other met me for a pint.

Sheila: Mostly I listen to people. Details about things like how the Gardaí operate and how to raise cattle I can find on the Internet, but to get any sense of the people and the place you have to spend time talking to people.

In the US I rarely hang out in bars, but I’ve visited my fair share of pubs in Ireland, and I’ve learned so much, about the right way to drink Irish whiskey, and what a wake is like, and the music business. (Connolly’s of Leap was in the past and is again now a center for music in West Cork.)

The town markets are treasure troves for information: over the past 20 years, I’ve made friends with writers and chefs and antique (and second-hand) dealers and fish-sellers and cheese-makers—and even one accused murderer. And of course, I’ve used a lot of the details in my County Cork series.

Had you been to Ireland before you set books there?

Lisa: No, it was the writing that inspired me to visit for the first and second and third and fourth time.

Sheila: Yes. On my first full day in Ireland, I knew that I’d have to use it as a setting somehow (and that I’d be back).

Do you have any stories about visits to Ireland/did any make it into the book?

Lisa: My best story was meeting Willie Daly, the real matchmaker, by accident during a horse market in Ennistimon. I stopped to pet a horse and then an old gent started chatting me up.

We introduced ourselves, and I about keeled over when he said his name. I went all blithering idiot on him and pulled out my books (yes, I carried them with me everywhere—one of my research tactics) to show him that the matchmaking festival had been an inspiration.

I made sure to tell him that my matchmaker was not based on him. He was so pleased and gratified when I signed over copies to him. Here’s the good part: a week later he sent me a text and we met up for coffee. He’d read Kilmoon. After a lot of gab, he got to the point. He wanted to know if the book was in any way based on true life. Oh my god!! What he really wanted to know: Was I his biological daughter? I mean, WOW. From his point of view, picture it: a stranger writes a debut novel about a woman who visits Ireland to meet her biological father for the first time. Willie must have been so nervous! (And I bet he was a randy lad in his prime!)

Sheila: Many! In "Buried in a Bog," Mick takes Maura (raised in Boston, with only a high school education) to visit the Drombeg Stone Circle, and she’s overwhelmed by it. It’s one of my favorite places in Cork, and I make a point of visiting it every time I’m there. It’s magic. I have been to a few music sessions at Connolly’s, and I borrowed the whole idea of reviving the music at the pub for "An Early Wake." (The owners had been talking about it back then, but it hadn’t happened yet. Now it’s back and thriving!)

Sheila, you now own a cottage there. Why did you decide to buy and what’s it like?

Sheila: On my second trip to Ireland, in 1999, I stayed in that original B&B again, and the owner said she knew a second cousin of mine and would I like to meet her?

Of course, I said yes! Catherine and I got together, and she took me to see the former Connolly home a few miles away. It hadn’t been occupied since the 1950s, but it was still standing, and sturdy enough that we could climb the stairs and check out the second floor. (That’s not possible anymore.)

We still get together when I’m there. That planted the seed. I first thought of buying and restoring the house, and actually negotiated with the owner, but it would have taken an immense amount of work (and money) to make it livable.

But I never gave up. About three years ago I started looking again. I’d been focused on places close to Leap and made an offer on one but that fell through. Then I took another (online) look at a cottage a few miles further away, in Drinagh, that had been available for sale for more than a year. I realized that it was a mile from where half my family had been born, married and buried, and you can see the farm and church tower from the back windows of the cottage. It was in fairly decent shape and reasonably priced, and now it’s mine.

It’s small (1500 square feet) but it has everything that’s necessary. And there’s a view of mountains in the distance, and cows across the lane, and plenty of rainbows.

Lisa, any thoughts about spending more time/buying in Ireland (I know it’s on my bucket list).

Lisa: I doubt I’ll buy in Ireland, but spend more time—for sure! In fact, I keep wondering if Sheila lets her place out to friends! (Hehe, Sheila?)

Clare: Me too Sheila!!