Ancient Irish tradition of hunting the wren coming to the US this St. Stephen's Day

Comhaltas Ceolóirí Éireann will have more than 40 regional branches participating in the ancient tradition this year, including branches in Philadelphia, St. Louis, and South Jersey in the United States. 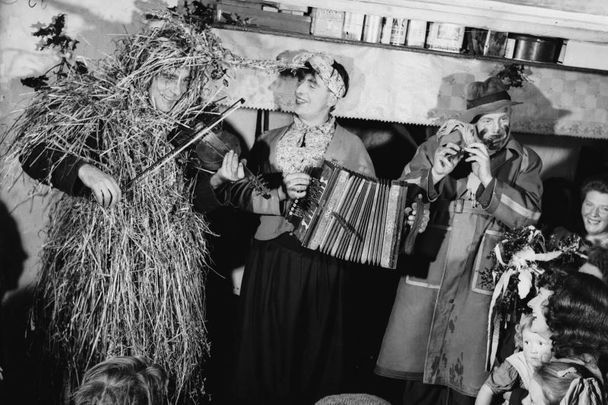 A group of mummers in Ireland celebrate St Stephen's Day or 'Wren's Day' on 26th December by processing from house to house with their instruments, circa 1955 Getty

The old Irish tradition of "hunting the wren" on St. Stephen's Day is coming to the US this holiday season thanks to an international Irish cultural movement.

Comhaltas Ceolóirí Éireann, a worldwide Irish cultural movement, will have more than 40 regional branches participating in the ancient tradition this year, including branches in Philadelphia, St. Louis, and South Jersey in the United States.

The tradition of hunting the wren dates back to Penal Times in Ireland when a wren was believed to betray a band of Irish fighters as they attempted to ambush Norse soldiers in an Irish village.

The Irish locals had surrounded their rivals and were poised to ambush them when a herd of wrens pecked on their drums and awakened their sleeping adversaries.

The plot failed and the wren became known as "The Devil's bird."

Crowds of people take to the roads around Ireland, wearing masks and straw clothing and generally accompanied by musicians.

Today, a stuffed wren is used instead of a real-life bird.

The wren mysteriously has a reputation for treachery dating back to early Christian times when God was said to have challenged all birds on Earth to fly longer and higher than all others to determine the King of all Birds.

One by one, the different species of birds dropped out of the sky until only the eagle remained. Tired, the eagle began to drop lower and lower until the treacherous wren emerged from its tail feathers and climbed high into the sky.

The tradition of hunting the wren on St. Stephen's Day has been kept alive by small groups around the country, but it has seen a revival in recent years and is set to take place in more than 40 different communities across Ireland, the UK, and the US this holiday season.