How a Spaniard built a bridge between Dublin and New York

There's a reason that Dublin's Samuel Beckett bridge and New York City's Oculus bear a resemblance to each other. 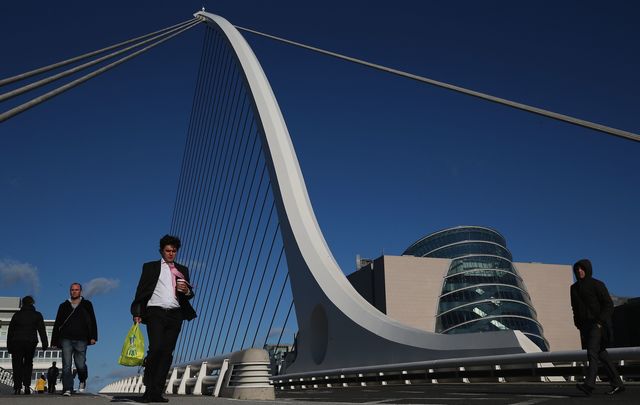 Have you ever noticed this link between the Samuel Beckett bridge and the Oculus?

When you finally see it, you wonder how you missed it.

Missed how the bow of Dublin's Samuel Beckett bridge is echoed in the wings of Manhattan's Oculus.

Or perhaps in your travels between Dublin and New York you, unlike me, absolutely noticed how both bridge and transport hub rise over their respective cities in sweeping arches of white steel, and you quite rightly realized the elegance they share is the result of Spanish architect Santiago Calatrava having designed both.

What you might not know is that bowed bridges and bird-like buildings are very much Calatrava's signature style. A prolific designer, Calatrava has built more than eighty structures across the world, with towers in Dubai and Barcelona, bridges in Berlin and Dallas, universities in Taiwan and Rome, and transport hubs from Switzerland to his native Spain. He's even built a time capsule and is working on a Greek Orthodox church.

I first saw the Beckett bridge from a Dublin airport bus, then a year later turned a New York City corner to unexpectedly see the Oculus. Both times I fumbled for my phone, eager to capture the pared-down beauty of these monumental structures which seemed both fresh and new and weathered white and smooth by wind.

It turns out that strong sense of the organic isn't an accident, says Rachael Jennings, an Irish architect working in New York and Berlin. The Samuel Beckett bridge, named after Ireland's Nobel Prize-winning writer, is "designed to resemble a natural form."

Bridges offer amazing opportunities for architects to create innovative, dazzling architecture, says Jennings, who adds that the Beckett bridge works well with its urban landscape. In a city notable for a lack of skyscrapers, the bridge feels "appropriate to Dublin's scale," she says, though at first not everyone was a fan of the bridge—which turns nine-years-old this December—maintaining it would increase the traffic it was meant to reduce, a fear since proven unfounded.

Designed to resemble an Irish harp, Calatrava wanted the bridge to "serve as a monument to Dublin," a tribute to the city's historic connection with creativity and music. That desire and that connection were honored literally when harpist Aisling Ennis gave a nighttime concert beside the landmark not too long ago, custom software illuminating corresponding cables on the bridge as she plucked her harp's strings.

"Dazzling" is what Karrie Jacobs calls Calatrava's bridges and the man himself the ultimate practitioner of architecture as art form. "I can understand why a city would want one" of his bridges, says Jacobs, who writes for Architect Magazine, and teaches at New York's School of Visual Arts.

Set in a protected hollow between skyscrapers, you'd be forgiven for thinking the Oculus resembles a monumental white dove, as Calatrava himself says he modeled the structure on "a child releasing a bird."

While Jacobs was initially "wowed by Calatrava’s aesthetic virtuosity" when first entering the Oculus' then-newly-completed west concourse, she has more sober thoughts now, calling the building "a very mixed up place" and "an artifact of the emotionally charged atmosphere in which it was conceived."

While aesthetically it wants to be a shrine, says Jacobs, "an uplifting monument to the old World Trade Center" and the devastation that happened on the sight on September 11, 2001, in the end the result is "primarily a shopping mall" trying hard to be chic. "And that seems awkward to me, and borderline immoral."

Calatrava wants the transportation hub to be "a testimony of hope…a memorial to life," and with its wing-like structure likened to a phoenix, the Oculus in some ways does offer a sense of rebirth in a part of Manhattan that often commemorates death.

Read More: Why Ireland needs a Troubles museum like the 9/11 one in New York

Within sight of the Oculus are memorial waterfalls occupying the space where the twin towers once stood, while close by is the Irish Hunger Memorial, with its symbolic stone cottage and striking cantilevered plinth. Also near is the granite elegance of the African Burial Ground National Monument, and the bas-relief bronze sculpture of the FDNY Memorial Wall.

Ultimately "buildings should always reflect their context and Zeitgeist," says Jennings, and despite divergent opinions about their capabilities or their costs, perhaps this is where the Samuel Beckett bridge and the Oculus excel. With their soaring elegance, each offers a feeling of expansion, a gaze-lifting grandeur welcome in a structure as mundane as a bridge or somber as a memorial.

Some say Calatrava's works share a similarity of concept and sameness, or they call the architect more showman than designer, but whatever is said about the man, it's clear that with the Samuel Beckett bridge and the Oculus, Santiago Calatrava has built an elegant, architectural bridge between Dublin and New York.

Had you ever noticed the similarities between Dublin's Samuel Beckett bridge and New York City's Oculus? Share in the comments