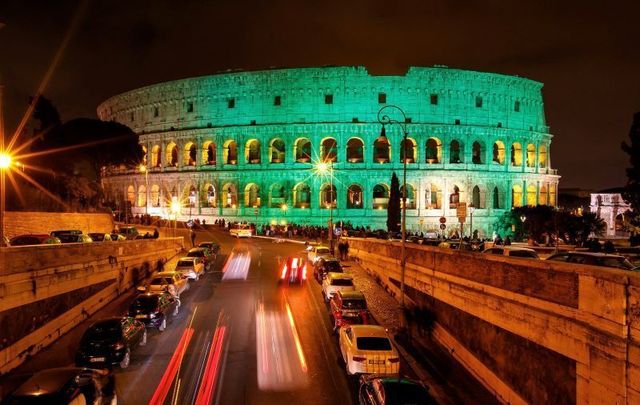 The Colosseum in Rome is one of hundreds of worldwide sites that take part in Tourism Ireland's Global Greening. RollingNews.ie

Tourism Ireland’s “Global Greening” initiative, which sees famous landmarks around the world decked out in green for St. Patrick’s Day, has announced several new sites that will be featured for their 10th anniversary this year.

On February 20, less than a month until St. Patrick’s Day 2020, Tourism Ireland revealed that new sites, including Madison Square Garden in New York, the world’s largest beaver statue in Beaverlodge in Canada, a giant statue of a kissing couple in Amsterdam, the Clifton Suspension Bridge in Bristol, Caerphilly Castle in South Wales, the Dubai Frame, and even the Smurf Statue in Brussels are to set to be part of the Global Greening event for the first time ever this year.

Additionally, eight universities and colleges in the United States and Canada – all with links to Maynooth University – have signed up to take part in Tourism Ireland’s Global Greening 2020.

Other notable new sites include the National Museum of Qatar, City Hall in Bangkok, the World’s largest Hockey Stick and Puck on Vancouver Island and the National Theatre in London.

These newcomers are joined by old favorites such as the Leaning Tower of Pisa, the Moulin Rouge in Paris (which will become the ‘Moulin Vert’!), Niagara Falls, the Sydney Opera House, Burj al Arab, the Chain Bridge in Budapest, and the London Eye in the ‘wearing of the green’ for St. Patrick’s Day. 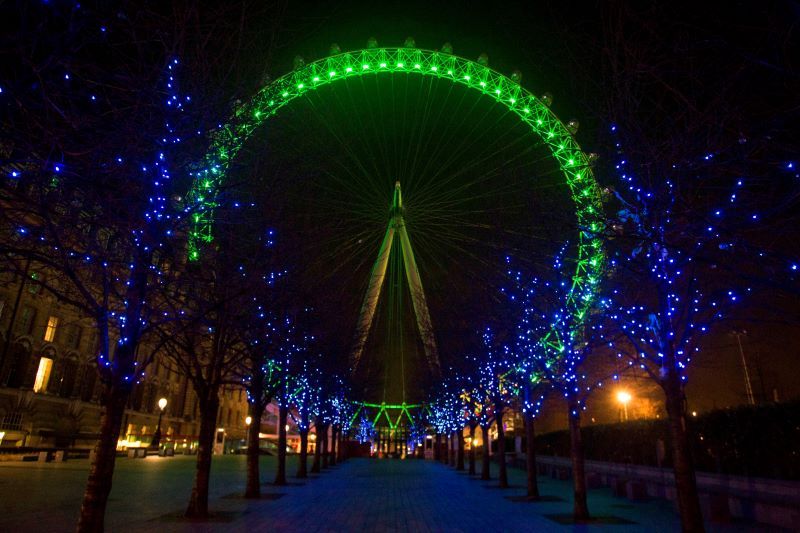 The Global Greening initiative began in 2010 when Tourism Ireland proposed that the Sydney Opera House in Australia be lit up green to coincide with the city’s commemoration of the 200th anniversary of the first reception ever held for Irish ex-pats by Governor Lachlann Macquarie in New South Wales.

In just under a decade, the idea has grown exponentially.

Niall Gibbons, CEO of Tourism Ireland, said: “2020 marks the 10th anniversary of Tourism Ireland’s Global Greening initiative and each year I am delighted to see even more well-known attractions and landmark sites wishing to get involved and join our St Patrick’s celebrations.

“The success of our Global Greening initiative is due in no small part to the great work that has been carried out across the world by Irish people and the Diaspora. I would particularly like to thank the Department of Foreign Affairs and Trade for the great support we receive from the Irish embassy network. The eagerness of cities and countries everywhere to take part underlines the strength of the deep connection that people all over the world feel to Ireland.

“More than 70 million people around the world claim links to the island of Ireland and St Patrick’s Day is a truly unique opportunity to reconnect them with their heritage.

“People across the world instantly identify St Patrick’s Day with the island of Ireland and that heightened profile allows us to put the Ireland holiday experience in the spotlight – from Sydney to San Francisco and from Brussels to Buenos Aires. Our St Patrick’s programme will span Great Britain, Mainland Europe, North America, Australia, as well as emerging tourism markets such as Japan and the UAE. There will be saturation coverage of the island of Ireland across the airwaves, in newspapers and digital media – and that’s an invaluable boost at this time of year for our overall tourism marketing drive for 2020.”

Gibbons told RTE that over 300 sites have signed up across more than 40 countries. France, he says, is in the lead with more than 50 icons going green.

The extensive list of landmarks that will go green for St. Patrick’s Day 2020 can be found here.

Are you visiting any of the Global Greening sites for St. Patrick's Day 2020? Let us know in the comments!