Dubliner gives one of the most blisteringly powerful performances by an Irish actor ever committed to celluloid in 'The Killing of a Sacred Deer.' 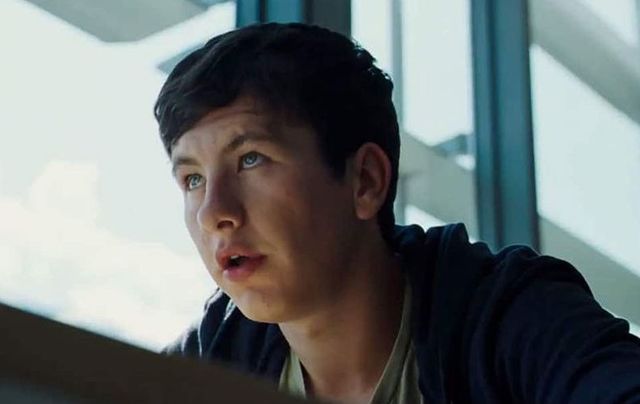 Barry Keoghan may not know a classic Greek Tragedy from a doner kebab, but that doesn't stop him giving one of the most blisteringly powerful performances by an Irish actor ever committed to celluloid in 'The Killing of a Sacred Deer.' He's what's known in the industry as a natural. Cahir O'Doherty talks to the rising young star about his megawatt role and the very bright road ahead.

Many of the recent crop of young Irish actors got their start by having parents already involved in the film industry. That's not Barry Keoghan.

“My story of acting is of acting the maggot,” Keoghan, 25, tells the Irish Voice.

“That's what my story is. In any inner city there's not a lot of opportunities and you really have to dig out and chase what you want to do cos' it's not handed to you, so.

“I grew up in Summerhill in Dublin's inner city and I came across an open audition and they were looking for inner city kids who had not acted. I signed up. I seen there was money. I said, I can do that, chancing me arm like. Turned out good.”

Good is an understatement. Keoghan gives a scene stealing performance in what many critics agree is the film of the year, Greek director Yorgos Lanthimos' deeply unsettling and brilliant The Killing of a Sacred Deer, which is out on November 3 and stars Colin Farrell and Nicole Kidman.

“It's a weird one, isn't it?” says Keoghan about the film and the 16-year-old profoundly psychologically disturbed character he plays, Martin. “Yorgos' tone and language are so strange. He doesn't ask you to deliver lines a certain way, you just kind of gather that from watching his other films and from watching Colin that this is how I should speak in this world.”

The tension between Keoghan and Farrell’s characters, which is murderous, unpredictable and at one moment unmistakably sexual, carries the film. How did they create that tension? Is it because Colin is from South Dublin and Keoghan is from North Dublin I joke?

Colin Farrell and Barry Keoghan in a scene from The Killing of a Sacred Deer.

“We had a laugh. The first day I seen him he just said, ‘Come here you, give me a hug.’  It's just that Irish thing. He was great, I really mean that, he was. I really looked up to him and Cillian (Murphy) growing up. The ones from home. They'd be the lads I looked up to, you know?”

Today Keoghan is in town with his Kerry-born girlfriend Shona, and they're clearly having the craic with their overseas trip in between interviews. It's also obvious they adore each other because they tease each other unmercifully the way the Irish do when they really like someone.

How do you keep faith with inner city Dublin when you're often swanning around in five star places like this (the Soho Club on Ludlow Street in Manhattan's Lower East Side) I ask?

“I think when you see it that way then you're doing good,” says Keoghan. “People can get lost in the movie star world. They can't check in with reality, whereas I live at home with me girl surrounded by real people.

“Also the Irish don't tend to put anyone on a pedestal. They'll be like, cop on now will ya? There's that at home which is great for me.”

Keoghan has a scene in his new film opposite Kidman where he's eating spaghetti which he still somehow manages to make one of the most threatening scenes in the entire film.

“There's so many layers to that scene,” he agrees. “I'm sitting in my boxers opposite Nicole Kidman and I'm asking myself as an actor, how can I make this scary? I just thought if I underplay everything, you know the more you throw away the bigger the impact. I downplayed it.  It was fun.”

The story of the film, what happens to the central characters, feels like Greek tragedy I say.

“I'm not aware of any of that,” he laughs. “I don't know about what Greek tragedy is. I only heard that from the likes of interviewers. I'm like, what's a Greek tragedy? I don't even know that.”

What he does know, instinctively, is how to nail a scene. He's so believable, his character is so perfectly realized, that for my money he carries the entire film.

Not that he would ever let that go to his head, though. It's very clear from talking to him how much he enjoys the success of other Irish actors and being counted among them himself.

“Fassbender's from her town down in Killarney,” says Keoghan nodding at Shona. “He goes home, has a pint with his father on Christmas and he's just a Joe Soap.”

Has he seen Chris O'Dowd in Get Shorty?  “Not yet. Chris O'Dowd's a legend isn't he? I like him.”

Later in the week Keoghan and Shona are flying back to Ireland for the Irish premiere of the film. Shona only recently saw it for the first time, and her response was one shared by many seasoned critics.

“She texted me WTF after she seen it,” Keoghan laughs. “That's the best reaction. I love this film because people either f***ing love it or they hate it. You have to understand and have an appreciation for Yorgos' language and his rhythms, you know?

You can have a perfect life, a perfect family, lots of money, and a gorgeous house the film says. Then suddenly something or someone pulls on a string and unravels it all. That's what makes The Killing of a Sacred Deer so unsettling. It's our awareness of just how much we're all hanging by a thread in life.

“A little torment comes in and f***s around with everything,” Keoghan laughs.

“That's Yorgos. He tends to like the Irish I think. He loves Colin. He works with Irish producer Ed Guiney a lot.  He tries to impersonate the Irish every f***ing day. He's always saying ‘alright to me. He has said to me I have been mistaken for Irish a few times. I'm like, ‘No you haven't.’ We do share a similar outlook though. The Greek people are lovely people and so are the Irish.”

Keoghan has worked with two of the top filmmakers in the world -- Christopher Nolan in the summer smash Dunkirk, and now Lanthimos -- back to back.

“I'm blessed. I had the chance to show the vulnerability of a young lad who is naive in Dunkirk (and star alongside Steven Spielberg's favorite actor Mark Rylance). It was dream for me within a few months to play these two characters in two big films.”

The more he goes away from Ireland now the more he wants to go back to it Keoghan says.

“I think every Irish person would tell you that nearly, whatever profession they're in. I have a lot of respect for me country now that I'm getting older and I can see why people really love Irish people. They're warm, they're fighters, they're a good crowd.”

What about his own Irish ambitious? “I want to work with Irish filmmakers like Lenny Abrahamson on Irish productions, because we're a talented bunch. I mean that, for such a small little country, we're story tellers.”

Keoghan's own background is far from idyllic, though. His mother started taking heroin when he was a child and by the age of five he and his brother were sent to foster care. Later she passed away from her addiction and the two boys were raised by his grandmother and aunt.

“I’d say I was 11 and me brother was 10 but I don't know what age I was. I asked me nanny (grandmother) and she said, No, you were nine and he was eight.’ But from around then. The Irish mammy is a big deal, isn't it? Especially cos' they're so tough,” Keoghan says.

“But my granny stepped in and her and my aunt they are a big part of my life. They took me in and they were good to me. But when the nanny steps in she's like the toughest of them all. You don't get to be a mammy's boy with her for long.”

Passing through Dublin’s north inner city on my last trip to Ireland, the airport bus was attacked by some local kids looking for kicks I tell him. One of them fired a rock at the back window shattering it, I say.

“That was probably me,” he laughs. “A bus was it? I'm not going to say something there. It's so weird you said the window smashed. I lived down the road from there. That's a great area. The whole inner city like.

“I live in flats as well. It's different in them, a real community. Everyone knocks in if they need milk.”

How does he put the two together? The flats and the high fliers?

“I think about it but I can see that line. I'll go home now in a few days and I'll butter my own bread, like. Well, she butters it with Kerrygold. As I say, they're only good for butter,” Keoghan joke.

“Nah, you're home and you're back to reality. I'm working on a good few things. I'm staying patient. I've a good record and I'm keeping that up.

“This is the perks,” he says looking around the tony Soho Club. “I can bring my girlfriend and see New York and LA. But I got to stay focused on where I'm from and who I am.”