Highly anticipated Christopher Nolan movie about the daring British rescue of over 400,000 Allied soldiers stars more Irish than you might think. 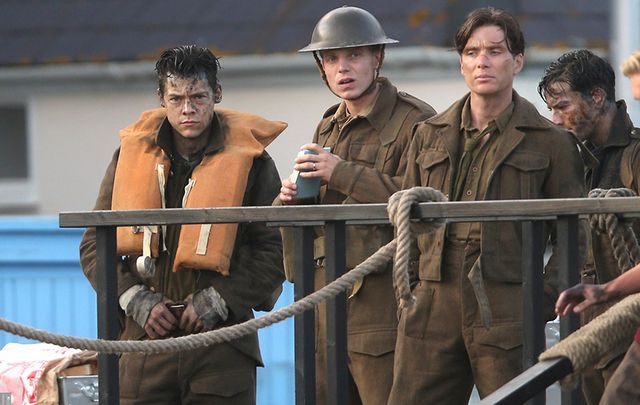 Dunkirk opens this Friday, and the highly anticipated film about the daring British rescue of hundreds of thousands of Allied soldiers surrounded by Germans on a beach in France during World War II is chock full of Irish actors.

Cillian Murphy from Co. Cork is one of the stars. He plays the character known as the “Shivering Soldier,” and he said that working with director Christopher Nolan never gets boring. (They’ve collaborated on many films before, including Inception and The Dark Knight).

“I hope the film takes people on an exciting, visceral journey into this experience, but that they’re ultimately moved by the human story that anchors it all.  That’s what Chris does so well with all films, and very much so with Dunkirk,” Murphy said during a recent interview.

“At its heart, it’s a film about courage and survival and the triumph of the human spirit, really.  That might sound trite, but I think in this case it actually applies.”

Murphy’s career is going from strength to strength – he stars in the popular British series Peaky Blinders which streams here on Netflix – but don’t ask him about social media.

“I’m too old for that,” he laughed when asked about his lack of a social imprint at the Dunkirk premiere in London on Thursday.

Kenneth Branagh, born and raised in Belfast until he was nine years of age, was asked to describe his experience on the Dunkirk set.  “Adrenalized, terrifying, emotional,” he replied.  “I was so proud to be in it from the get go.”

Then there’s rising star Barry Keoghan, 24, a native of Dublin’s inner city who was dubbed a “next big thing” by The Hollywood Reporter in May. Keoghan is well known to Irish audiences thanks to appearances on the popular crime drama Love/Hate; in addition to appearing in Dunkirk, he’ll also be seen later this year with Colin Farrell and Nicole Kidman in The Killing of a Sacred Deer.

Keoghan’s got quite a back story. He and his brother spent five years in foster homes until they went to live with their grandmother when Keoghan was 10.  Their mother, unfortunately, was a heroin addict, and the drug eventually killed her.

“I try to be there and be present and use that history that I have. I have a different story to tell,” he told The Hollywood Reporter.

Keoghan and Murphy made their way to Dublin on Sunday to attend the Irish premiere of Dunkirk, where Keoghan told a reporter that he has no intention of increasing his new-found fame with a move to Hollywood.

"Jesus, no. I feel that it's a great place to be, good vibes or whatever, but here I feel I have my feet on the ground, or in the mud as it may be. I'm surrounded by good people and I just think over there, it could get to my head and I don't want that," he said.