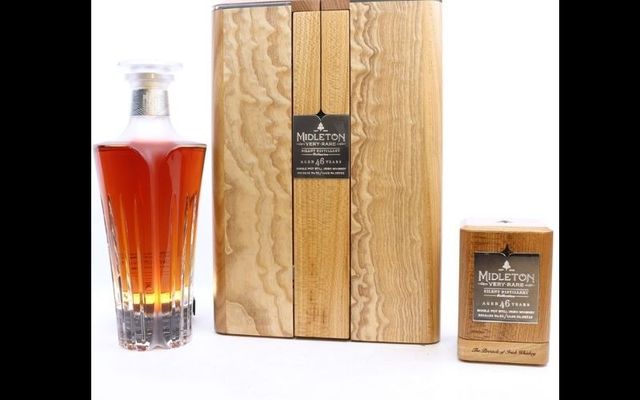 A bottle of Irish whiskey has fetched almost €50,000 at a recent auction, representing the highest price ever paid for an Irish whiskey at a public auction.

A second bottle of the 2021 edition, an exceptional 46-year-old single malt whiskey, also sold for €46,000 at the same auction.

Only 48 bottles of the rare 2020 whiskey were launched two years ago in Ireland, France, the UK, and the US. One bottle previously fetched €35,000 at an earlier auction.

Anthony Sheehy, the founder and owner of Irish Whiskey Auctions, said the two sales reflected a growing interest in Irish whiskey around the world.

"Irish Whiskey now has bottles that are comparable to the bottles of Scotch and Japanese whiskies that command ultra-premium prices on the world stage," Sheehy said in a statement.

"It is something that we should be  shouting from the rooftops to show the fantastic growth and interest that exists for  Premium Irish Whiskey."

Meanwhile, the third edition of the Midleton Very Rare Silent Single Malt whiskey is expected to be released in the coming months.

The Irish distillery is releasing new bottles every year between 2020 and 2025, culminating in the release of its oldest-ever release to celebrate the 200th anniversary of the Old Midleton Distillery in 2025.

Irish Whiskey Auctions was founded in 2018 by Dundalk couple Anthony and Katie Sheehy. The company hosts monthly online auctions and has held a total of 38 auctions since its foundation.