With this pumpkin pancakes recipe, you won't have to wait until dinner time to dig in on Thanksgiving! 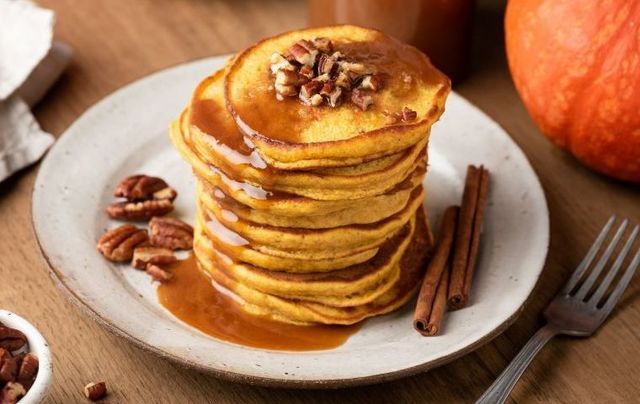 With this pumpkin pancakes recipe, you won't have to wait until dinner time to dig in on Thanksgiving!

The turkey, stuffing, potatoes and pumpkin pie may be the main act of the day but that’s not to say that there can’t be some delicious supporting acts early on in the day to get the family going.

There’s nothing worse than feeling hungry while preparing the family's most delicious meal of the year, so pumpkin pancakes are a great way to remedy this predicament, as well as being delicious.

Kids in the family will also love decorating the pancakes with candy, banana slices, raisins, or chopped nuts, so this recipe doubles as a cunning way to keep them entertained while you see to the main act and star of the show!

In a separate bowl, lightly beat together the milk, egg, pumpkin, and oil.

Pour batter, 1/3 cup at a time, onto the prepared griddle.

Cook until bubbles appear on the surface, then flip and cook until golden brown on the other side. About five minutes per side.