Gormley's Pub in Rocky River, Ohio, is sponsoring an upcoming fundraiser that will offer samples of the 47-year-old Midleton Very Rare Whiskey to 20 lucky guests. 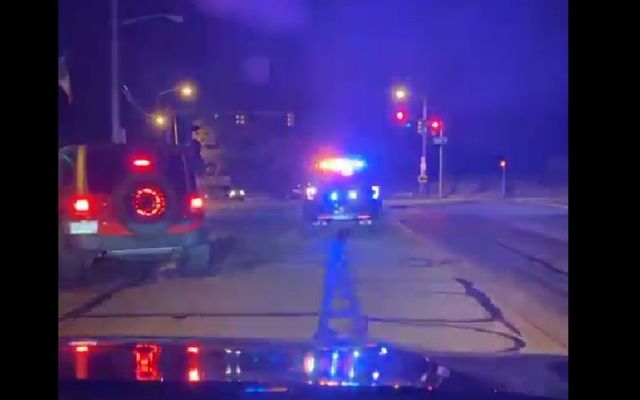 A rare bottle of Irish whiskey worth a whopping $50,000 received a police escort to an Irish pub in Ohio on Wednesday ahead of a special fundraising event.

The bottle was taken to Gormley's Pub in Rocky River, Ohio, which is sponsoring an upcoming fundraiser that will offer samples of the 47-year-old Midleton Very Rare Whiskey to 20 lucky guests.

The Festival of Midleton Whiskeys fundraiser aims to raise money for the Malachi House charity in Cleveland, which provides support for people suffering from terminal illnesses.

"The Festival of Midleton Whiskeys is a two-day celebration of Irish whiskey which aims to raise vital funds for Malachi House in Cleveland, an organization that seeks to preserve human dignity for terminally ill individuals through the provision of food, shelter, clothing and comfort," organizers said on the Festival of Midleton Whiskeys website.

Gormley's Pub shared a video of the rare bottle of Midleton whiskey being escorted to the pub by Rocky River police on Wednesday night.

Pub owner Sean Gormley told Newsweek that local law enforcement were very open to the idea of giving the bottle an escort, adding that he hopes it helps generate publicity for the upcoming event.

"I thought it would be nice and just bring a little bit more attention. The police department in Rocky River is very, very supportive and they said they would love to help," Gormley told Newsweek.

The two-day Festival of Midleton Whiskey will take place on December 5 and 6 at the Clifton Club in Lakewood, Ohio. Tickets for the first night are $159 and offer samples of several Irish whiskeys, including Blue Spot, Gold Spot, Redbreast Kentucky Oak Edition, Redbreast PX Edition, and Redbreast 27-Year-Old.

The second night of the two-day festival will be a black-tie event for 20 lucky guests, including a sample of Midleton Very Rare 2022, Midleton Dair Ghaelach Kylebeg Wood, and the exclusive 47-year-old Midleton Very Rare Silent Distillery Chapter Three. Each whiskey will be paired with a plated gourmet whiskey dinner experience.

Tickets for the second night of the fundraiser start at $3,500.

How to roast a Thanksgiving turkey, with tips from our Irish chef!