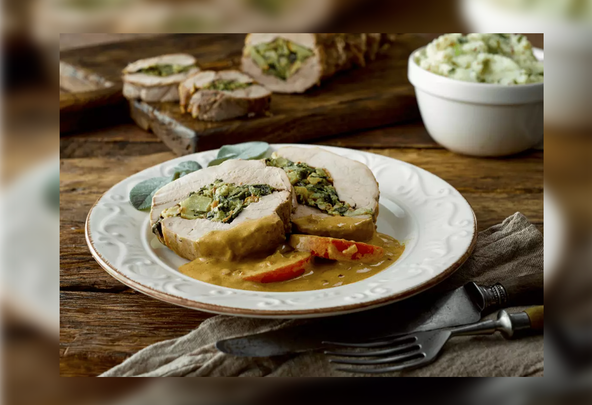 Recipe for stuffed pork steak with apple and cider sauce, straight from the Irish food board.

Research from Ireland’s food board, Bord Bia, has shown that pork is still among the most popular everyday meats in Ireland.

Irish shoppers are spending $156 million (€135m) on pork products annually and 59% of those surveyed eat pork at least once a week.

Ireland is now well known as a country of foodies and it seems that even their everyday cooking is becoming that much more adventurous.

Celebrated chef Catherine Fulvio said “People often forget that pork can be a fantastic everyday meal option. There are so many quick and versatile ways to cook pork; it’s a great and economical meal solution that will appeal to the whole family.”

For apple and cider sauce:

To make the stuffing, heat the oil in a large saucepan over a medium heat.

Add the onion and cook for a couple of minutes until the onion softens.

Stir in the garlic and apples and cook for two to three minutes.

Then add in the spinach and stir to mix.

Remove from the heat and continue to stir in the spinach.

You need the spinach to soften a little but not wilt down totally.

Add in the breadcrumbs, walnuts, sage and salt and pepper.

Set aside to cool while you prepare the pork.

Trim each of the pork steaks then cut down lengthways to open them up.

Make sure not to cut all the way through.

Place a sheet of parchment paper or cling film over the meat and flatten the steaks with a rolling pin.

You will end up with two oblong pieces of meat which are perfect for stuffing.

Season the meat with a little salt and black pepper then spread the cooled stuffing down the length of one of the steaks and then place the other steak on top.

Tie at 5cm intervals with string.

Transfer to a roasting tin.

Spread the softened butter over the meat and season.

Roast in the preheated oven for an hour.

Then remove from the oven, take the meat from the roasting tin and allow to rest, loosely covered with foil while you make the sauce.

Put the roasting tin with the juices on a high heat.

Add in the cider and water and stir.

Bring to the boil, reduce the heat slightly and allow to simmer for five minutes.

Meanwhile heat a frying pan over a medium heat.

Add a little butter, allow it to melt then add in the diced shallot.

Cook for a couple of minutes to allow the shallot to soften.

Add the apples to the pan and allow to cook for a couple of minutes.

Then strain the cider and juices from the roasting tin into the frying pan.

Stir in the crème fraîche, bring the boil, reduce the heat and simmer for five minutes to reduce and thicken.

Carve the pork into slices and serve with the apple and cider sauce, steamed broccoli and mashed potatoes with a couple of tablespoons of wholegrain mustard stirred through them.