What could be a more fitting Irish potato recipe in October than the traditional Halloween recipe for colcannon? 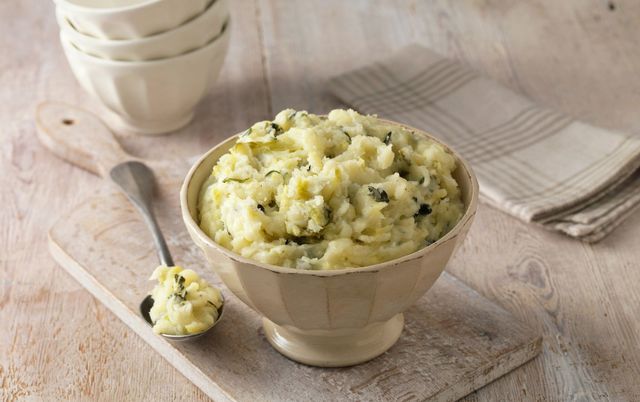 What could be a more fitting Irish potato recipe in October than the traditional Halloween recipe for colcannon?

Colcannon, with its unique and simple recipe, has become popular around the world. It normally includes chopped kale or green cabbage mixed with hot, floury mashed potatoes.

In the past, over Halloween charms were mixed in with the colcannon. Depending on what charm you found it was seen as a portent for the future.

*Not everyone adds scallions to colcannon, but they do add something, in my opinion.

Peel and put them in a pot to boil.

While the potatoes are cooking, remove the core from the cabbage, slice the leaves thinly, and put into a large saucepan.

Cover with boiling water from the kettle and keep at a slow rolling boil until the cabbage is just wilted and has turned a darker green.

This can take anything from 3-5 minutes, depending on the cabbage.

Test it and don’t let it overcook - if anything it should be slightly undercooked.

When the cabbage is cooked, drain it well, squeeze to get any excess moisture out, then return to the saucepan.

Add one-third of the butter and cover.

Leave it covered and in a warm place, but not on a burner, with the butter melting gently into it while you continue.

With the drained potatoes in, set the burner to low, leaving the lid off so that any excess moisture can evaporate.

When they are perfectly dry, add the milk to the saucepan, along with a third of the butter and the chopped scallions (if you are using them).

Allow the milk to warm but not boil – it is about right when the butter has fully melted and the pot is starting to steam.

Before serving, season with a little salt and sprinkle with fresh parsley or chives. Most importantly, make a well in the center of the mound of potato and put the last third of the butter in there to melt.

Do you have a favorite way to cook potatoes? Start a potato-tastic conversation in the comments section below.