Chef Gilligan gives us a round-up of the history of hot dogs before delving into two classic hot dog recipes. 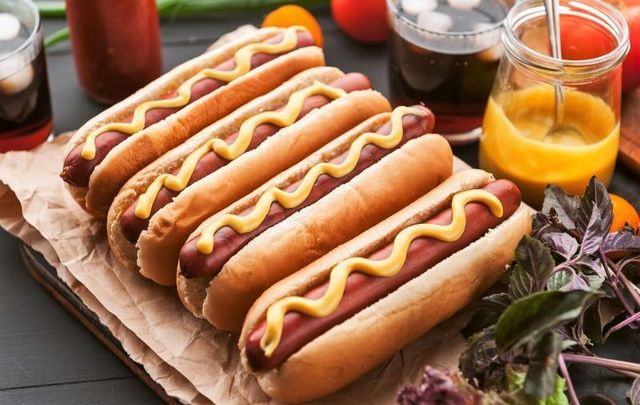 'Tis dogs' delight to bark and bite,"
Thus does the adage run.
But I delight to bite the dog
When placed inside a bun

Sausages were mentioned in Homer's "Odyssey" as far back as the 9th century BC. Though controversy dogs its history of origin, (did you see what I did there?) it is one of the oldest forms of processed food that still enjoys a strong popularity. And no one disputes that.

Frankfurt-am-Main, Germany, is traditionally credited with hot dog's place of birth. However, this claim is disputed by those who assert that the popular sausage - known as a "dachshund" or "little-dog" sausage - was created in the late 1600s by Johann Georghehner, a butcher, living in Coburg, Germany. According to this report, Georghehner later traveled to Frankfurt to promote his new product.

Actually, in 1987, the city of Frankfurt celebrated the 500th birthday of the hotdog in that city. It's said that the Frankfurter was developed there in 1484, five years before Christopher Columbus set sail for the new world. However, Vienna came up with protests against this German celebration because the people of Vienna, Austria, point to the term "wiener" to prove their claim as the birthplace of the hot dog.

In line with these theories of origin, it is likely that the North American hot dog comes from a widespread common European sausage brought here by butchers of several nationalities.

Doubt also looms large over another 'first' about it - the name of the man who first served the dachshund sausage with a roll. One report says a German immigrant sold them, along with milk rolls and sauerkraut, from a pushcart in New York City's Bowery during the 1860s. In 1871, Charles Feltman, a German butcher opened up the first Coney Island hot dog stand selling 3,684 dachshund sausages in a milk roll during his first year in business.

The year, 1893, was an important date in hot dog history. In Chicago that year, the Colombian Exposition brought hordes of visitors who consumed large quantities of sausages sold by vendors. People liked this food. For, it was easy to eat, convenient, and inexpensive.

In the same year, sausages turned out to be the standard fare at baseball parks. This tradition was begun by a St. Louis bar owner, Chris Von de Ahe, who also owned the St. Louis Browns major league baseball team.

The term "hot dog" was coined in 1901 at the New York Polo Grounds. One cold April day, concessionaire Harry Stevens (his company is still in business) was losing money with ice cream and ice-cold soda. He sent his salesmen out to buy up all the dachshund sausages they could find, along with an equal number of rolls. In less than an hour, his vendors were hawking hot dogs from portable hot water tanks with "They're red hot! Get your dachshund sausages while they're red hot!"

In the press box, sports cartoonist Tad Dorgan was nearing his deadline and desperate for an idea. Hearing the vendors, he hastily drew a cartoon of barking dachshund sausages nestled warmly in rolls. Not sure how to spell "dachshund" he simply wrote "hot dog!" The cartoon was a sensation--and the term "hot dog" was born.

Today's hot dog on a bun was probably introduced during the St. Louis "Louisiana Purchase Exposition" in 1904 by Bavarian concessionaire, Anton Feuchtwanger. He loaned white gloves to his patrons to hold his piping hot sausages. Most of the gloves were not returned, and the supply began running low. He reportedly asked his brother-in-law, a baker, for help. The baker improvised long soft rolls that fit the meat--thus inventing the hot dog bun.

In a saucepan over medium heat, sauté the onions in butter until tender. Add celery, ketchup, water, lemon juice, sugar, vinegar, Worcestershire sauce, and mustard; bring to a boil.

Cut three ¼ inch deep slits on each side of hot dogs; place in a 2-1/2 quart baking dish.

Pour the sauce over the hot dogs.

The Chicago Dog is a Windy City classic, and a big favorite with sports fans! The frank must be all-beef, the bun must be poppy seed, and the ingredients must be piled onto the bun in the order specified. And whatever you do, don't spoil the splendor with ketchup!

Bring a pot of water to a boil.

Reduce heat to low, place hot dog in water, and cook 5 minutes or until done.

Remove hot dog and set aside.

Carefully place a steamer basket into the pot and steam the hot dog bun for 2 minutes or until warm.

Don't even think about ketchup!

Two Irish nuns have just arrived in the USA by boat and one says to the other, "I hear that the people in this country actually eat dogs."

"Odd," her companion replies, "but if we shall live in America, we might as well do as the Americans do."

Nodding emphatically, the mother superior points to a hot dog vendor and they both walk towards the cart. "Two dogs, please," says one.

The vendor is only too pleased to oblige and he wraps both hot dogs in foil and hands them over the counter.

Excited, the nuns hurry over to a bench and begin to unwrap their "dogs."

The mother superior is first to open hers. She begins to blush and then, staring at it for a moment, leans over to the other nun and whispers cautiously: "What part did you get?"