The history of New York Irish corned beef and cabbage

Why do Irish Americans love corned beef and cabbage so much? Here's the story behind the traditional recipe. 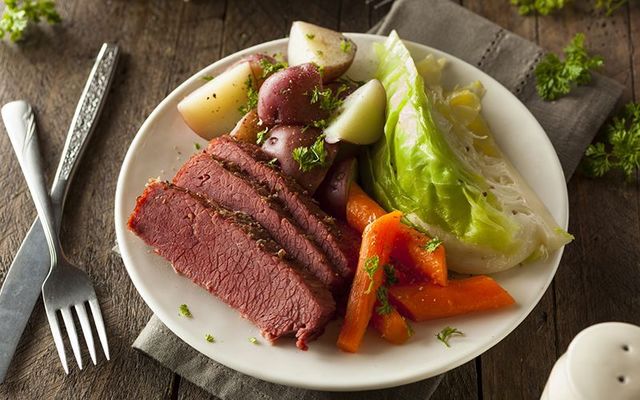 From St. Patrick's Day in Ireland to why the Irish Americans eat their traditional meal rather than Irish bacon. Getty

Why do Irish Americans love corned beef and cabbage so much? Here's the story behind the traditional recipe.

St. Patrick's Day usually falls during the fasting season of Lent when eating meat is prohibited and everyone gives up something. On St. Patrick's Day, a dispensation is given in Ireland to eat meat and to indulge in what was given up for Lent.

As children, we always had to give up sweets for Lent and it was always such a treat to be able to eat candy on St. Patrick's Day. The most affordable special dinner is cooked on that day.

Until the 1970s, pubs in Ireland were closed on this day but now that they are open, a visit to the local pub in the evening is often warranted. In the pub, there will be songs, stories, and dancing. In city pubs, there is often a band but in the local country pubs, the good singers of the area will sing traditional Irish songs.

As closing time approaches, the locals who are tone-deaf will be getting up to sing. At this point, everyone will join in and if the weather is dry, the party will continue on the street after the pub closes.

History of corned beef and cabbage

While many North Americans associate corned beef and cabbage with Ireland, this popular St. Patrick's Day meal has roots in America and is not traditional Irish food.

Corned beef, a salt-cured brisket, was traditionally packed and stored in barrels with coarse grains, or "corns" of salt. One of the earliest references to corned beef appears in the 12th-century Gaelic poem Aislinge Meic Conglinne, where it references a dainty, gluttonous indulgence. By the 17th century, salting beef had become a major industry for Irish port cities of Cork and Dublin, where Irish beef was cured and exported to France, England and later to America.

With the majority of Irish beef being exported, beef was an expensive source of protein and unavailable to the majority of Irish citizens. Cows, if owned at all, were raised predominately for their dairy products, from which butter, cheese, and cream could be obtained, and were only slaughtered when they were no longer good for milking. Sheep were raised as a source of wool and hogs and pigs were one of the only livestock species raised by the peasantry for consumption.

Salt pork and bacon, therefore, became the commonly consumed meat protein of Irish tables. Fat from bacon supplemented the lack of fat in the farmhouse diet and Sir Charles Cameron was quoted as saying that he does "not know of any country in the world where so much bacon and cabbage is eaten." Even today corned beef and cabbage appears infrequently in Irish pubs and restaurants, except for those in heavily tourist areas, and is much more likely to be replaced by its traditional counterpart - an Irish stew with cabbage, leeks, and a bacon joint.

After the Irish potato blight, or Great Famine, of the mid-19th century, brought hundreds of Irish emigrants to the shores of America, the newly immigrated Irish Americans found corned beef to be both more accessible and more affordable than it was in Ireland. Both corned beef and cabbage were ingredients of the lower working class, and their popularity among the Irish population likely had little to do with similarities to the food of Ireland and more to do with the relatively inexpensive nature of salt-cured beef and green cabbage.

For several decades following the Irish immigration, St Patrick's Day was celebrated with music, crafts, and revelry but banquets, while lavish, contained a scarcity of traditional Irish cuisine. However by the 1920s, corned beef and cabbage came to have an association with Irish American cooking, although it was also used in the cooking of eastern European Jews.

Place the corned beef in a colander in the sink and rinse well under cold running water.

Place the corned beef in a large Dutch oven with a tight-fitting lid; add the water, bay leaves, peppercorns, allspice, and cloves. Bring to a boil, uncovered, and skim off any scum that rises to the surface. Cover and transfer pan to the oven, and braise until very tender, about 3 hours and 45 minutes.

Transfer the corned beef to a cutting board and cover tightly with foil to keep warm. Add the cabbage and potatoes to the cooking liquid and bring to a boil. Lower the heat and simmer until the vegetables are tender about 20 minutes.

AND FINALLY… Seamus was about to go on his first date, so he asked his brother, the ladies man, for advice. "Give me some tips on how to talk to them."

"Here's the secret," said his brother, "Irish girls like to talk about three things: food, family, and philosophy. If you ask a girl what she likes to eat, it shows your intentions are honorable. If you discuss philosophy, it shows you respect her intelligence."

"Gee, thanks," said Seamus. "Food, family, and philosophy. I can handle that."

That night as he met the young lady, Seamus blurted out,

"Do you have a brother?" asked Seamus.

"Well, if you had a brother, do you think he would like cabbage?"

May your blessings outnumber
The shamrocks that grow,
And may trouble avoid you
Wherever you go.