Chef Gilligan serves up some Memorial Day advice and a delicious pie recipe. 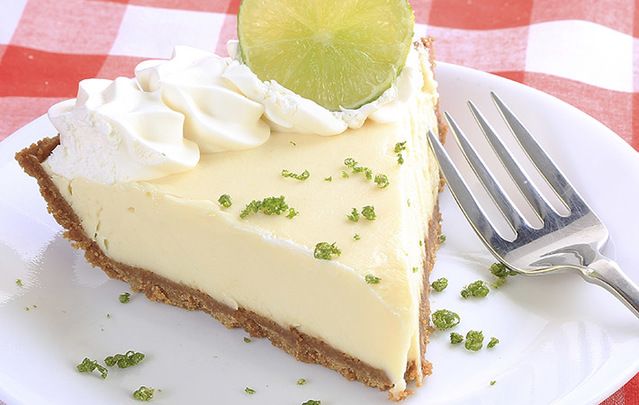 Our Irish chef in Miami gives us a full low-down on the history of this fresh summer favorite, perfect for Memorial Day.

Aficionados of key lime pies argue endlessly about the proper way to make one. Graham-cracker or pastry crust? Meringue on top or whipped cream, or neither? Cooked or uncooked filling? The one thing that they do agree on is that under no circumstances should you ever add green food coloring. The filling of an authentic key lime pie is a light yellow.

As to who made the first key lime pie, no one really knows for sure as it has never been documented. The most likely story is that William Curry, a ship salvager and Florida's first self-made millionaire (commonly referred to as rich Bill), had a cook that was simply known as Aunt Sally. It was Aunt Sally who created the pie in the late 1800s.  Some historians think that Aunt Sally didn't create the Key Lime Pie, but probably perfected a delicacy that was the creation of area fishermen. William Curry built a lavish mansion for his family in 1855 that still is being used today as the Curry Mansion Inn. I have slept in that very house. Well, on the steps but that counts, right?
It was not until the 1930s that the first recipes were written down. Until then everyone just knew how to make the pie. No fresh milk, no refrigeration, and no ice was available in the Keys until the arrival of tank trucks with the opening of the Overseas Highway in 1930. Because of this lack of milk, local cooks had to rely on canned sweetened condensed milk, which was invented in 1856 by Gail Borden. Key lime may be the star ingredient of the key lime pie, but it is the sweetened condensed milk that makes it so smooth and delicious.

The key lime tree, which is native to Malaysia, probably first arrived in the Florida Keys in the 1500s with the Spanish. Key limes look like confused lemons, as they are smaller than a golf ball with yellow-green skin that is sometimes splotched with brown. They are also known as Mexican or West Indian limes. When a hurricane in 1926 wiped out the key lime plantations in South Florida, growers replanted with Persian limes, which are easier to pick and to transport. Today the key lime is almost a phantom and any remaining trees are only found in back yards and their fruit never leave the Florida Keys. Key limes are also grown for commercial use in the Miami area.
In 1965, Florida State Representative Bernie Papy, Jr. introduced legislation calling for a $100 fine to be levied against anyone advertising key lime pie that is not made with key limes. The bill did not pass.

Makes 8 servings
Ingredients
1 ½ cups graham cracker crumbs
½ cup granulated sugar
4 tablespoons (1/2 stick butter) melted
2 (14-ounce) cans of condensed milk
1 cup key lime or regular lime juice
2 whole eggs
1 cup sour cream
2 tablespoons powdered sugar
1 tablespoon lime zest
Method
Preheat the oven to 375 degrees F.
In a bowl, mix the graham cracker crumbs, sugar, and butter with your hands. Press the mixture firmly into a 9-inch pie pan, and bake until brown, about 20 minutes. Remove from the oven and allow to cool to room temperature before filling.
Lower the oven temperature to 325 degrees F.
In a separate bowl, combine the condensed milk, lime juice, and eggs. Whisk until well blended and place the filling into the cooled pie shell. Bake in the oven for 15 minutes and allow to chill in the refrigerator for at least 2 hours.
Once chilled, combine the sour cream and powdered sugar and spread over the top of the pie using a spatula. Sprinkle the lime zest as a garnish on top of the sour cream and serve chilled.
AND FINALLY… what do you call basement citrus?
Sub-Lime
AND REALLY FINALLY… This Memorial Day, it is important that we take the time out of our busy schedules to reflect, honor, and remember the men and women who have died while serving our country.  It is those men and women that have contributed to our freedom and safety as Americans.
All too often we forget that freedom is not free. A huge price is paid with the lives of the brave men and women who have chosen to serve in our country’s armed services.  It is my hope that this Memorial Day you will look beyond the barbecues and department store sales to remember what this day is really set aside for.  I ask you to honor their sacrifice by reviewing your commitment to our country.
Please remember too, the sacrifice of the wounded soldiers on this special day.  To all the brave men and women in all branches of the armed services, please know, I honor your service and sacrifice. You are not forgotten.  You are appreciated more than you know and are constantly in my thoughts and prayers.