Short on time? Our Irish chef shares his quick and easy chocolate mousse recipe - and some fun facts! - that are just perfect for Valentine's Day! 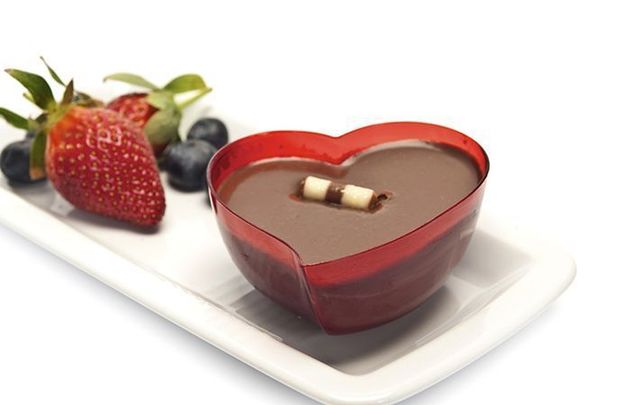 No matter how late you leave your planning for Valentine's Day, we've got your back with this super simple recipe that is sure to wow.

So here’s what you do: go to the bodega at the end of the block and pick up some flowers, a bar of nice chocolate, and a card.

Get home before your other half and bang out this recipe for chocolate mousse. I timed it, it only takes three minutes and in the hour that it takes to set you should really bathe and use some mouthwash.

Place chocolate, egg, vanilla, Grand Marnier or Cognac, sugar and a pinch of salt into a blender and blend just enough to mix.

Heat the milk until just about to boiling.

Pour milk into a blender and blend for 1 more minute.

Pour into 4 dessert cups and refrigerate for an hour.

Just note, the quality of the chocolate does affect the taste. More expensive chocolate is enhanced by the liqueur.

See, that was easy, right?!

Now while you wait for it to set, here are some interesting (well, I find them interesting but then again I am a food nerd) things about chocolate:

The botanical name of the chocolate plant is "Theobroma Cacao", which means "food of the Gods."

The word 'Chocolate' comes from the Aztec word "xocolatl," which means "bitter water."

In 1579, English pirates raided a Spanish ship. Upon finding its cargo of precious cocoa beans they burned the whole ship—they mistook the beans for sheep dung.

Some health experts say the purer the chocolate, the better it is for you. Chocolate with a cocoa content of more than 50% is high in magnesium and contains calcium, potassium, sodium, and iron. It also has vitamins A1, B1, B2, C, D, and E.

British people are second only to the Swiss when it comes to chocolate consumption. The average Briton eats 19lbs of chocolate per year.

Although chocolate is not an aphrodisiac, as the ancient Aztecs believed, chocolate contains phenylethylamine (PEA), a natural substance that is reputed to stimulate the same reaction in the body as falling in love. Hence, heartbreak and loneliness are great excuses for chocolate overindulgence.

Chocolate melts at just below the temperature of the mouth, thirty-four degrees centigrade.

Chocolate syrup was used for blood in the famous 45-second shower scene in Alfred Hitchcock's movie, "Psycho," which actually took 7 days to shoot.

Chocolate is poisonous to dogs, cats, and other domestic pets. The ingredient theobromine overstimulates their cardiac and nervous systems and can cause death.

Christopher Columbus is said to have brought chocolate back to Europe after he visited South America in about 1504, but it only reached Britain in the 17th century. At the time it was made into a drink; but only for the wealthy, because of high import duties.

Steric acid, a fat found in chocolate, does not raise cholesterol levels, even though it is a saturated fat.

Chocolate has always been included on all American and Russian space flights.

Reasons why chocolate is better than a man:

Reasons why chocolate is better than a woman:

What's your favorite Valentine's Day chocolate recipe? Let us know in the comments!