This Celtic apple crumble recipe from Kerrygold is the perfect after-dinner treat! 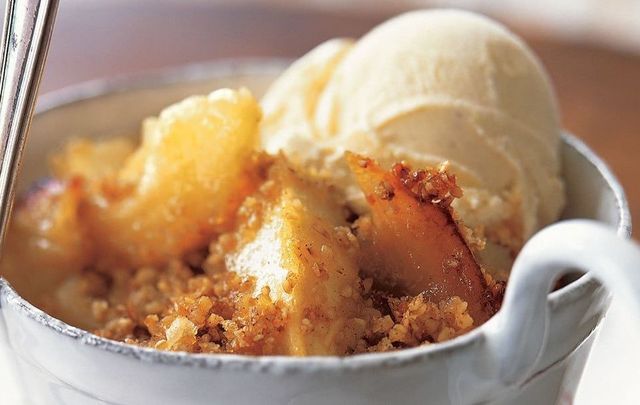 Tart apples, Irish whiskey, and Kerrygold butter? This is a perfectly decadent, Irish treat that food experts and cookbook authors vouch for.

Here at IrishCentral, we're pretty much on board with any dessert recipe that calls for Irish whiskey - but add in some Kerrygold and we're just flat out excited!

Made from the milk of grass-fed, never hormone-induced, Irish cows, Kerrygold ultimately yields a product that has a rich, golden texture and smooth, creamy flavor.

The Irish butter is so delicious and purely produced that it’s become trendy to put a dollop in your coffee, but we’re certain there are even better uses – like this decadent recipe for Celtic apple crumble with Irish whiskey cream sauce.

“Apples have always played an important part in Irish folklore, tradition, and diet, so it’s no surprise to find apple desserts in great supply and variety. This apple crumble, sometimes called ‘apple crunch’ when the apples are first cooked to soften them, is flavored with a respectable dose of Irish whiskey and topped with a buttery oatmeal crumble. Serve it with vanilla ice cream, whipped cream, or Irish Whiskey Cream Sauce” said Margaret Johnson, Irish food expert and cookbook author.

Johnson uses Kerrygold Irish butter to make this crumble. The butter, churned from the milk of grass-fed cows that graze in Ireland’s lush pastures, has a creamy richness and a remarkably golden color from the beta-carotene in the grass. It is the preferred butter of many seasoned bakers.

To make the filling, in a small saucepan over medium heat, bring the water and whiskey to a boil. Stir in the raisins and vanilla. Remove from the heat, cover, and let stand for 1 hour, or until the raisins have absorbed most of the liquid.

Preheat the oven to 375°F. Butter an 8- or 9-inch square glass baking dish. In a large bowl, toss the apples with the sugar, cinnamon, and ginger. Stir in the raisins and cooking liquid and arrange in the prepared pan.

To make the crumble, combine the flour, brown sugar, and butter in a food processor. Pulse 4-5 times to form coarse crumbs. Stir in the oats. Sprinkle the mixture over the fruit and bake for about 40 minutes, or until the topping is golden and the apples are tender. Serve warm or at room temperature.

In a deep bowl, beat the cream with an electric mixer on high until soft peaks form. Dissolve the honey in the whiskey. Fold the honey mixture into the whipped cream and spoon over the crumble.

What's your favorite recipe - does it call for Irish whiskey and Kerrygold?! Let us know in the comments!