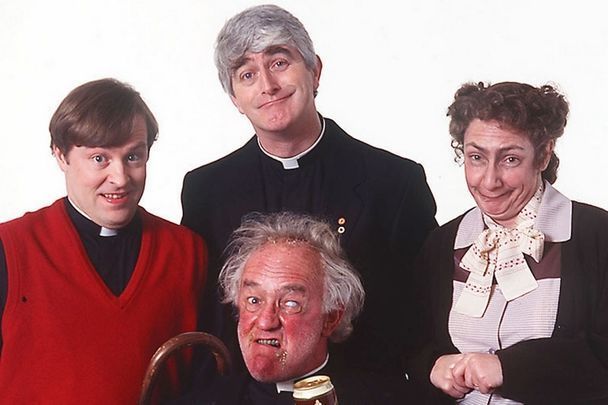 The cast of Father Ted.

Every episode of the classic Irish comedy "Father Ted" has been ranked from best to worst.

Meanwhile in Ireland has created The Ultimate Father Ted Episode Guide, which ranks every episode in the beloved series from when the sitcom first aired on April 21, 1995, until it ended in 1998.

The brainchild of Graham Lineman and Arthur Mathews, "Father Ted" follows the lives of three priests and their housekeeper, Mrs. Doyle, on the fictional Craggy Island. The show only ran three seasons - it ended with the death of 45-year-old actor Dermot Morgan in 1998 - but has since gained cult status.

A few months ago,  Meanwhile in Ireland announced they were looking for a Father Ted expert to watch and review all 25 episodes of the Channel 4 show in three weeks.

The chosen candidate, Lousie Kiernan, was selected from over 200 applications worldwide. According to the website, Kiernan seemed a perfect fit for this dream job as she is a key organizer of Tedfest, an annual fan convention held on the island of Inishmore, and a passionate Father Ted enthusiast.

Kieran worked alongside the team at Meanwhile in Ireland to research and develop the first definitive "Father Ted" ranking guide, and now it's here!

Each episode was ranked on a scale of one to ten  (with 10 the maximum score), examining the episode plot line, “laugh-o-meter,” and memorable one-liners.

According to the guide, the best ever “Father Ted” episode and the only one to earn a perfect 10 score, is 'Speed 3,' the third episode in the third season.

In this take-off of the Hollywood film “Speed,” Ted tries to save the day from a bomb-ridden milk truck belonging to promiscuous milk man Pat Mustard.

One-liners from the episode include: “Well, Ted, I’m very cynical as you know,” and “Pat was wondering if he could put his massive tool in my box.”

To see how the other 24 shows were rated, you can check out a concise article of the guide’s findings on the Meanwhile in Ireland website or download for free the complete full guide, which further analyzes each episode.