"It was an amazing experience being here for so long, and to eat the food, drink the drinks, go walking. It was truly a fabulous." 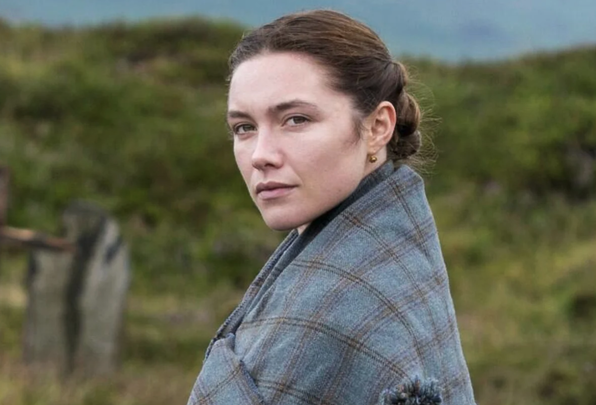 Florence Pugh in "The Wonder".

Add Florence Pugh to the long list of thespians who had a great time while filming in Ireland.  The 26-year-old English star spent several weeks in Ireland shooting "The Wonder", a new Netflix film that starts airing on November 16.

“Haunted by her past, a nurse travels from England to a remote Irish village in 1862 to investigate a young girl’s supposedly miraculous fast,” is how Netflix describes its film, which is based on a novel by Emma Donoghue, best known for her novel "Room" which was adapted into an Academy Award-winning movie.  The girl in question, only 11, hasn’t eaten in four months, and Florence plays the nurse trying to crack the mystery.

"The Wonder" had its Irish premiere in Dublin last week, and Florence was on hand to talk to journos about spending time on location in Wicklow which is where the movie was primarily shot last year.

“Your life when shooting on location is completely determined by the food, the people, the hospitality, the warmth.  Despite us shooting a very, very difficult storyline, a very powerful story, we had the most amazing time," she said.

Speaking to RTE, she added, "It was an amazing experience being here for so long, and to eat the food, drink the drinks, go walking. It was truly a fabulous, fabulous time."

The Oxford-born actress said she wouldn’t mind living in Ireland at some point.   "I'd love to, it's idyllic, I'd love to. As I said it was a very intense storyline shoot, and the whole thing was made possible by the people you are around,” she told the Irish Mirror.

"There is a whole reason why we've come back smiling.  It is because of this place and the people and your hospitality."

Before she left Ireland, Florence made sure to shop for some staples to bring home, specifically Tayto cheese and onion crisps which so many Irish living abroad crave.

“Thank you Dublin. It was brief, sunny, rainy, gorgeous, had a few pints, attended a wonderful premiere, packed a bag of crisps...done,” she posted on her Instagram.